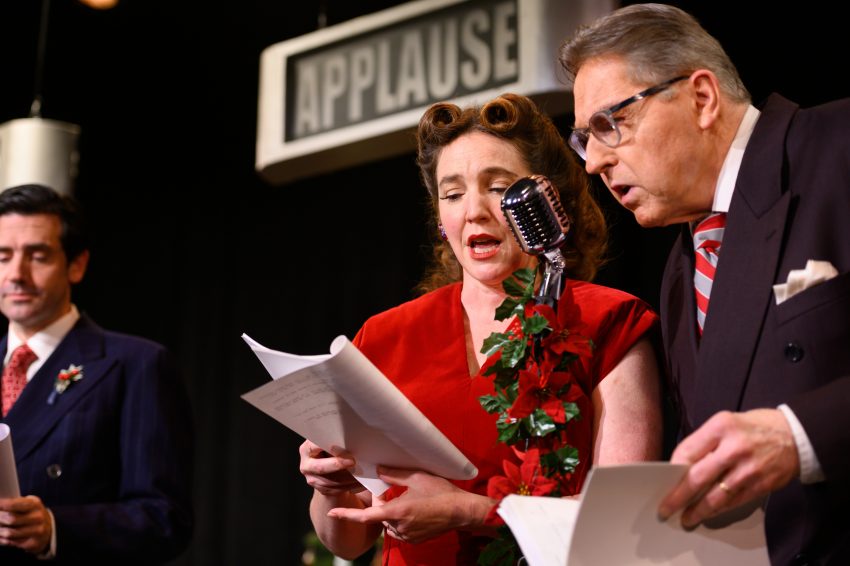 We are in radio STUDIO A at WBFR in Manhattan on Christmas Eve, 1946. The cast leisurely strolls onto the sound stage—straightening props, rustling scripts to let us know “We’re not quite ready yet.”

The host of the show Freddie Filmore (jovial Kendall Tieck) wears a beautiful brown tweed suit and bow tie (a shout out to Costume Designer Tammara Plankers). The friendly Filmore engages us, asking about the weather—a strong contrast to his other radio role, mean and greedy Mr. Potter.

When ON THE AIR lights up, the actors gather around two big 40s microphones. Filmore is introduced as host of “Females are Fabulous.” They are going to tell the story of George Bailey and the people of Bedford Falls, New York. Behind them, we see three bentwood chairs, an old radio console, and glasses of water.  Set Designer Marilyn Langbehn lets the actors shine.

The radio play unfolds with Clarence, an Angel Second Class (sincere Keith Jefferds), pleading to be promoted to get his wings.  Saint Peter makes him George’s Guardian Angel because George is considering suicide over his failing Bailey Brothers Building and Loan. So, Clarence flies down to earth on Christmas Eve to help George realize how many lives he has touched.

Clarence learns all about George as a boy. It’s 1919, the icy water on the lake cracks, and 12-year-old George saves his younger brother Harry from drowning. George loses his hearing in one ear in the process. I don’t know what they’re stirring on the stage, but it sounds just like ice cracking.

So, why is George so distressed? From the movie, we know that George has given up his dreams of travel and education for duty to the family business.  He has been the champion of fairness and kindness. He has yet to understand that “no man is a failure who has friends.”

To the left of the stage is a table with an array of everyday objects—shoes, a telephone, spoons, a tire—used to create sounds, and a piano where Bobby Bell (Don Tieck) plays original music. Tieck has created a theme for each character, as they quietly step in to add sound effects.

At his after-school job, George prevents disaster when he realizes the druggist, Mr. Gower, has made a mistake.  Remember, George is 12, so the actor’s voice rises to a boy’s pitch.  Each actor is having a terrific time, switching swiftly between roles. You won’t wait for the APPLAUSE sign to light up when you hear what they do with their voices.

The five radio actors play more than 50 roles. Sponsors interrupt with old-fashioned commercials: one for men’s hair cream, the other for auto windshield bug cleaner, each with a catchy 40s jingle. It’s a kick!

When George is reunited with wife Mary (demure Merrill Grant) and their children, little Zuzu (sassy Kim Donovan) tells us she knows that “every time a bell rings, an angel has just earned his wings.” The perennial “Wonderful Life” finds a charming new life for Christmas at Contra Costa Civic Theatre—a delightful treat!