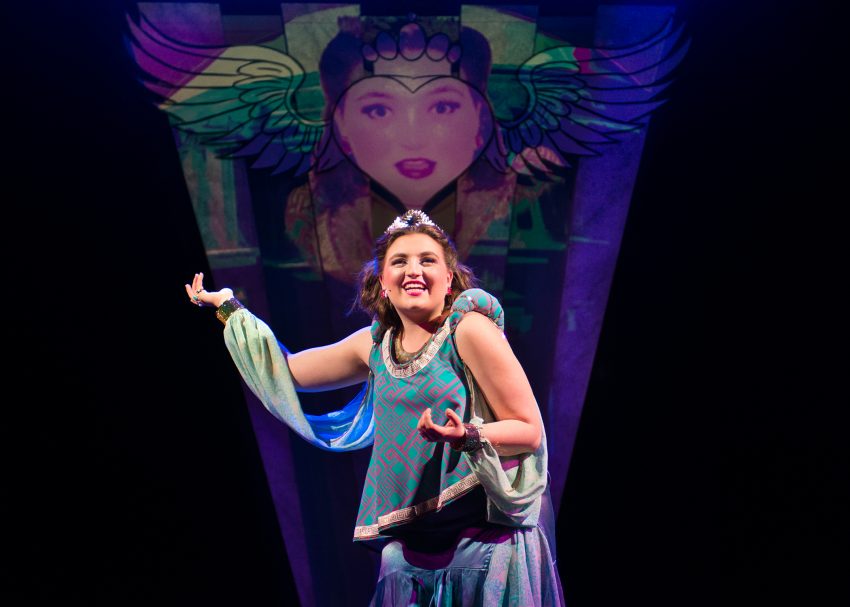 Does it make a lick of sense to combine Sir Philip Sidney’s 400-year-old pastoral romance Arcadia with the 1980s new wave sound of the Go-Go’s? Not in the slightest. But is it entertaining as hell? You bet!

At New Conservatory Theatre Center, director Ed Decker and the exuberant cast of “Head Over Heels” have “Got the Beat!”

Pythio (opulent Rotimi Agbabiaka), the Oracle of Delphi, looks elegant and stunning from head to toe, in vibrant greens and silvers, capturing an air of mystique and wonder.

Sharply angled Greek columns and video projections transport us to ancient kingdoms and lush forests. Heart-shaped videos and sexy photos get us laughing at the love problems of shepherds pretending to be courtiers. Nothing is what it seems, at first. Arcadian King Basilius (effective William Giammona) and his Queen Gynecia (jovial Stephanie Temple) both dream of a lustful affair with a strange Amazon visitor.

Formerly, the Arcadians lived utopian lives, invigorated by always having “The Beat.” When the king receives four perplexing prophecies from the Oracle, he sets off with his entire court, determined to outrun fate. Hilarious hijinks ensue, ranging from surprise lesbian romances to gender-bending disguises.

The cross-dressing plot feels at odds with the message of LGBTQ acceptance, as Musidorus’ antics are largely played for laughs until the final scene.

While the show is always enjoyable, it cannot quite escape the pitfalls of a jukebox musical, including ham-handed attempts to fit the Go-Go’s songs into Arcadia. You can practically hear Jeff Whitty’s gears whirring, as he finagles the script to include more popular tunes like “Vacation.”

NCTC continues to present shows that challenge conventional ideas of sex and gender. “Head Over Heels” may stumble a bit, but by the end, the show is dancing to “The Beat.”