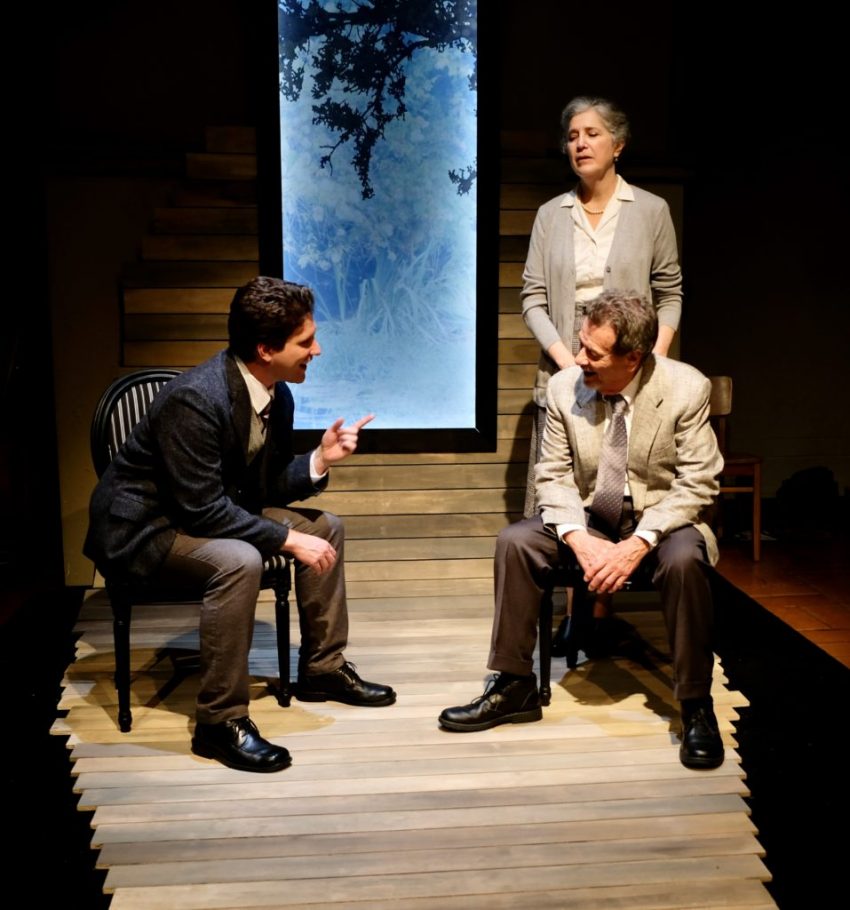 Director Bruce Coughran demonstrates his mastery of language and movement, as his powerful cast of three encircle the tiny boardwalk stage at Indra’s Net Theater.  Coughran summons the ghosts of these real-life, legendary physicists—Niels Bohr and Werner Heisenberg—to walk the wooden planks in 40s Copenhagen, while Bohr’s wife looks on—with her own sharp insights.

In the afterlife, we walk with Heisenberg and Bohr as they reflect on their bumpy student-teacher history. Bohr tries to figure out why his former student is visiting him from Hitler’s Berlin to Nazi-occupied Denmark. Heisenberg’s visit, under the suspicious eye of Margarethe Bohr, seems suspect and risky. We share her doubts about the over-eager, ambitious Heisenberg.

The two Nobel physicists replay their contagious creativity, as they advance to Quantum theory, Uncertainty, and Complementarity— often at odds with one another. Bohr, the Pope of Physics, and Heisenberg, his German star pupil, revisit their research into nuclear fission, cyclotrons, and The Bomb. Their discoveries shape the outcome of WWII and American bombs at Hiroshima and Nagasaki, a bone chilling realization.

Calm and stable Margrethe (elegant Nancy Carlin) takes notes as they debate, keeping us focused on their powerful disputes—Uncertainty vs. Complementarity, particle vs. wave, Nazis vs. Allies. She is the nucleus around which Bohr, the unwavering electron, and Heisenberg, the invading photon, revolve.

She knows Heisenberg wants something from Bohr, but is it—forgiveness, formulas, or forbidden secrets?  Disdainfully, she treats the young German like a lost child, now a dangerous enemy. She recalls her own lost children, and humanizes their theories, breaking into their motives, underneath.

Headstrong Heisenberg (powerful Aaron Wilton) often stands outside the Bohrs’ inner sanctum, pacing like an erratic Photon. We wonder if he if he did deliberately avoid making the calculations for a German bomb. Director Coughran keeps him off the path, gazing outward, alone.

At one point, he sits with the audience, sharing heartfelt moments, appealing for our sympathy and forgiveness. I feel compassion for him, but wonder, like Margrethe, about his true intentions.

The revered Bohr, (thoughtful Robert Ernst), father of the Atom, asks Heisenberg if he did the  calculations for a German bomb. But we wonder how Bohr, himself, excuses his own later work at Los Alamos in 1944.

Niels Bohr, the loving father, mentor, and friend, dissolves before us when he admits that he helped create the Bomb. We realize that he has abandoned his moral stand. Bohr, through his work, helped create the atomic bomb, taking hundreds of thousands of lives in Japan.

Frayn’s emotional debates and Coughran’s captivating direction hold us spellbound. They boldly present two real Nobel physicists who risked their lives and beliefs on nuclear research. Their story impacts us all. Now, a button can wipe out millions of people. Now, we are looking, again, at the threat of fascism and hundreds of bombs throughout the world. How can one erratic man hold that power, if these two geniuses still give us doubts?

Better see “Copenhagen” to understand how we got where we are. It’s the true story of our present and our future, beautifully told, perfectly portrayed, and stunningly staged.