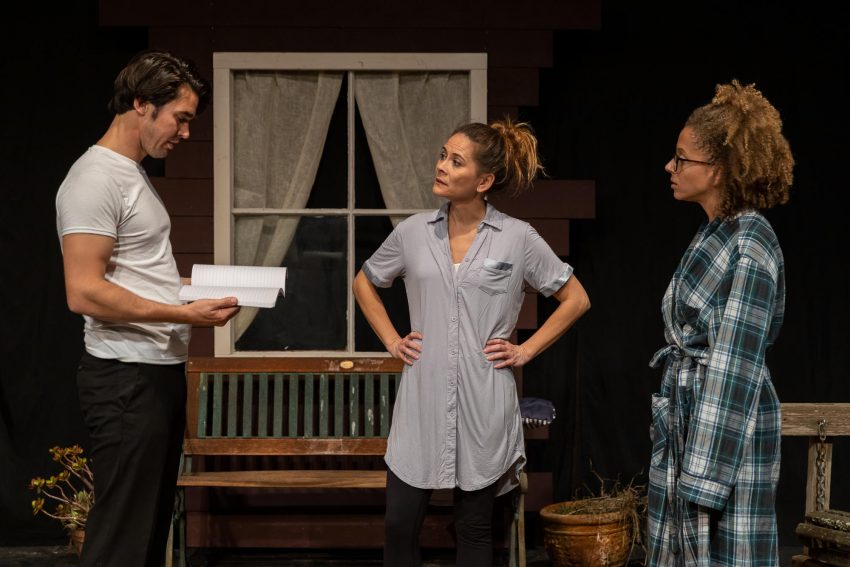 “Proof” explores a father and daughter’s compassionate connection—even after death.

We meet Catherine (magnificent Alicia Mason) on the back porch of her home in Chicago, discussing her life with her dad, Robert (brilliant Joseph Walters) who died a week ago. Catherine converses with a hallucination. Mason conveys Catherine’s teetering emotions, powerfully in the New Group Theatre production of the Pulitzer and Tony Award Best Play.

Robert, her mathematical genius father, succumbed to mental illness, losing his ability to work coherently with numbers. In her hallucination, he wants Catherine to pursue her genius for Math: “You could recite all the prime numbers when you were three.” She has his talent, but fears inheriting his insanity.

Auburn uses riveting flashbacks to show how deeply Catherine feels the loss of her father. Catherine idolizes her father, and math was always their private language. We smile at Robert’s calming advice: “Let’s back off the problem, let it breathe, come at it again when it’s not looking.” We also feel her need to hold onto him. She walked away from a full scholarship to care for him at home, for years.

Her controlling sister, Claire (dynamic Melissa Thompson Esaia) pushes “crazy” Catherine to go back to NY with her. But we root for Catherine’s independence.

Fast-talking Hal (Brandon Michael Hall), young prof and former graduate student, comes to Catherine’s home to shuffle through Robert’s 100 notebooks. Hal is looking for a groundbreaking math formula to honor his old teacher. Or, so he tells Catherine before professing his romantic interest in her. We wonder about Hal’s true motives.

Hard to believe, but after one night, Catherine gives Hal the key to a secret drawer, where he discovers an amazing prime number formula that will revolutionize math. And Catherine announces that she created it—not her dad! Who will believe her?

Claire and Hal occupy a more worldly level than soul-searching Catherine and Robert. Claire and Hal whittle away at Catherine’s confidence, increasing her fear of insanity. We see Catherine’s self-doubt grow and feel her defeat. How many times have we wondered why someone refuses to believe us? We ask, “Is it me?”

In the final flashback on a freezing Chicago night, Catherine pleads with her father to come inside for warmth. But Robert is manic with inspiration: “My machinery is working! It is on full blast!” She reads his garbled, poetic work, aloud: “Let X equal the quantity of all quantities X. Let X equal the cold. It is cold in December.” Robert collapses, defeated after he realizes what he has written, never to return to numbers, again. A part of us collapses with him, too, saddened by their loss.

Although “Proof” uses some confusing and intriguing changes in time, it holds our attention, always. Auburn’s sensitivity to profound father-daughter interactions captivates us.