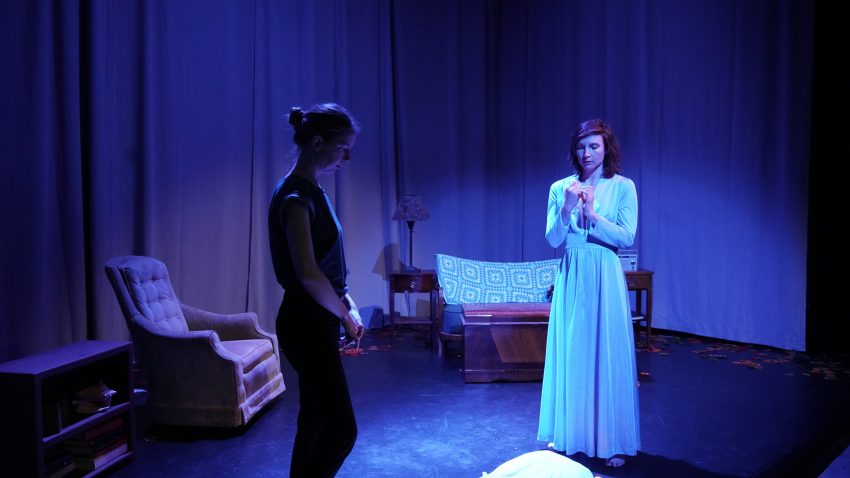 Lana Palmer’s “Funeral Game’ is a haunting and powerful drama that escalates to an intriguing conclusion, marking her as a playwright worth watching.

Two emotionally distant sisters return to their grandmother’s lakeside cabin after her death, to find ghosts of the past waiting for them. The sisters, Amy, (Rachael Richman), and Ruthie, (Emma Attwood), bicker their way through shared childhood memories, confronting then retreating. They circle an unspoken truth, as each sister struggles with her place in a family damaged by a childhood tragedy.

A goosebump-inducing supernatural element opens Palmer’s story to our speculation, allowing us to decide how much of the paranormal activity is otherworldly and how much is human meddling.

My own wild childhood, with its sibling rivalry came to mind as I watched Amy and Ruthie fluidly re-enact familiar childhood games, conjuring up sometimes conflicting versions of their past. “Funeral Game” projects feminine energy and Palmer boldly delves into the darker side at this world premier Bread & Butter Theatre production.

Director Bruce Avery uses dust sheets as ingenious metaphors for the shaking out of repressed sisterly resentment. As the dust rises, the conflict escalates. Director Bruce Avery, renowned Theater Professor at S.F. State, balances the female driven story with male perspective. Avery guides us smoothly into a gripping, consistent drama. He uses the intimacy of the 99 seat Potrero Stage to pull me right into the story.

“Funeral Game,” with a single set and only two characters, immerses us deeply in the sisters’ psychological conflict. Personality quirks, contradictions, and vulnerabilities emerge as each sister struggles to defend her place in the family hierarchy.

Each sister argues for the direction she chose. Ruthie, a designer, and Amy, an accountant, can barely understand each other. I felt like a fly on the wall as elaborate layers of emotion are peeled back to expose more family history and grief.

It takes assured actresses to pull off such an intense story. Rachael Richman gives a powerful, nuanced performance as Amy, the closed-down, mercurial older sister, who protects herself with an acid tongue. Amy wears her grandmother’s blue satin nightgown, adding an eccentric 1940’s air, and showing her adherence to a past that no longer serves them.

Playwright Lana Palmer doubles as sound designer, and uses lyrical solo piano to enhance the mood of sadness and loss at the heart of the play. Ray Oppenheimer rises to the lighting challenge, placing a key light on Amy, in an emotionally ravaging scene. The searing light emphasizes her eyes, and accentuates her anguish.

Bread and Butter Theatre succeeds with Palmer’s smart, truthful new play. I feel privileged to be among the first to see her delicate yet supple story unfold. Highly recommended.