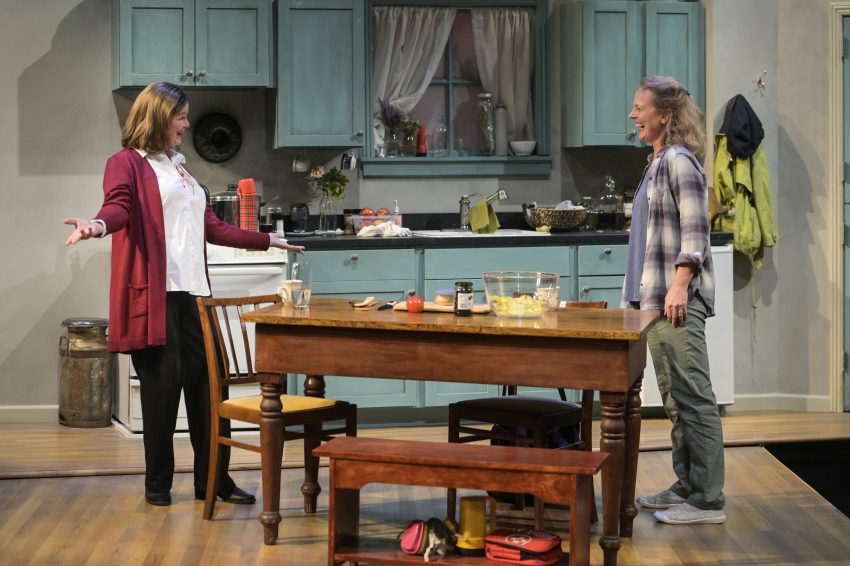 Lucy Kirkwood’s “The Children” grabs us right away with a bloody nose—a hint of bigger disasters to come. A physicist, Rose (cunning Anne Darragh), mysteriously visits two fellow physicists unannounced after 38 years, as blood drips from her nose onto her white shirt.

Nervous Hazel offers secretive Rose a glass of tightly rationed water. Hazel’s small cottage sits just ten miles from a nuclear plant disaster. We feel Hazel’s helplessness: “The thought of leaving the area, it felt disloyal to the land.” Everything is wrong in this remote seaside cottage—the air feels poisoned.

Down to earth Hazel has had four children, now grown, and describes her strict routine to Rose, grasping her yoga schedule as if to let go would mean death. Hazel, and husband Robin, are alone out there now, but still afflicted by the suffering of their oldest daughter.

Eccles brings life to Hazel’s unfiltered emotions, perfectly embodying her faltering struggle to use her daily routine to hold on to life.  Hazel offers Rose her mantra: “If you’re not going to grow, don’t live.” What is the value of their lives after the nuclear meltdown? We empathize with her, as they grapple with isolation and trauma.

Hazel recounts the earthquake that triggered the tidal wave and flood at the offshore power plant. Radiation has contaminated the air and land—most people have fled. These three scientists helped to design the faulty power plant, causing flooding and deaths.

Rose brings news about an inquiry into the “one-in-ten-million-years fault sequence.” Under the guise of friendship, we sense that Rose’s has more secrets to unravel.

Enter jovial Robin (flirtatious James Carpenter) with tricycle in hand. Clearly, he has a sexual connection to Rose, their visitor. Robin’s obvious attraction and smirking, joking ways, superbly acted by Carpenter, call into question his long, rocky marriage to super-efficient Hazel. Robin flamboyantly uses a handy Geiger counter to measure his bike’s contamination before he rides it around the women.

Darragh’s Rose keeps us wondering until we realize she has come to offer them a bitter choice—a way to make amends, a life-changing shocker.

But who would return to the site of a disaster like Chernobyl or Fukishima? Will they follow her? Rose’s suggestion breaches the core of their being and irradiates what they most value in life.

Although I found Kirkwood’s pace uneven, timelines confusing, and the ending rushed, the story presents questions about power, politics, and personal passions that afflict us all.