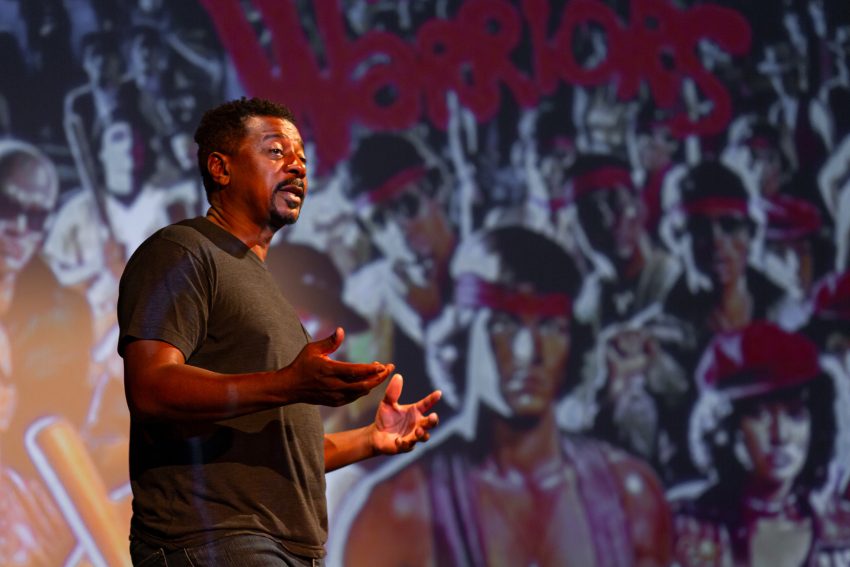 Robert Townsend’s “Living the Shuffle” is a triumph. Townsend gives us a deep meditation on race, success, and his life as a “TV guy” as his friends from his childhood put it. Townsend expertly weaves deeply personal moments with laugh out loud comedy to create an experience unlike any I’ve seen before.

Townsend captivates us with impersonations of actors Denzel Washington and Marlon Brando, and a delightful moment when he plays with an imaginary Lassie. Townsend, a successful Hollywood writer and filmmaker, writes, directs and performs his impressive one man show, a spectacular feat.

His energy and enthusiasm ripple the theater with familiar imitations and surprising revelations. Although his script is neatly constructed, Townsend’s improvisational tone makes watching it a truly intimate experience.

At one moment I think I caught Townsend laughing at his own joke, sacrilegious on a Broadway stage, but here a truly special moment. Here’s a man on stage using humor to deal with the setbacks and conflicts of his life.

Townsend, the director of Hollywood Shuffle (1987) guides us through his surprising life. With poise and grace, Townsend takes us from the poverty of the Chicago projects to star studded Hollywood parties. When he recreates a pivotal confrontation with a neighborhood gang, he deftly displays his acting talents.

Townsend quivers in fear right before the leader of the gang (Townsend plays all the roles of course.) Against all odds, the gang lets him go. Ironically, Townsend happened to pick the short gang leader first in a basketball game the day before—as a joke. That decision turns out to affect the rest of Townsend’s life, and informs his lifelong relationship to God, or fate.

When, at an audition, a British casting director racially profiles Townsend, he makes the moment both brutal and hilarious. He transforms dark moments with enlightening humor, and funny stories give way to profound meditations.

Townsend dramatizes the grim realities that confront an African American actor in Hollywood. He recounts how and why he decided to make his own films. “Images are powerful,” Townsend says, “They travel the world like a bad publicist spreading lies about you.”

By creating his own work, Townsend can shape the narrative. He continues to do so in “Living the Shuffle.” Robert Townsend appears onstage as his real, vulnerable self. He relives the time with his many mentors and meditates on his love and divorce. We leave this wonderful, one of a kind show with a deeper understanding of the Hollywood ‘Shuffle’ for African Americans.

At the beginning of his career, a reviewer noted that “Robert Townsend is somebody to watch.” Well, the world has been watching, and we like what we see. Townsend’s humor, grace, and poise make “Living the Shuffle” a must see.