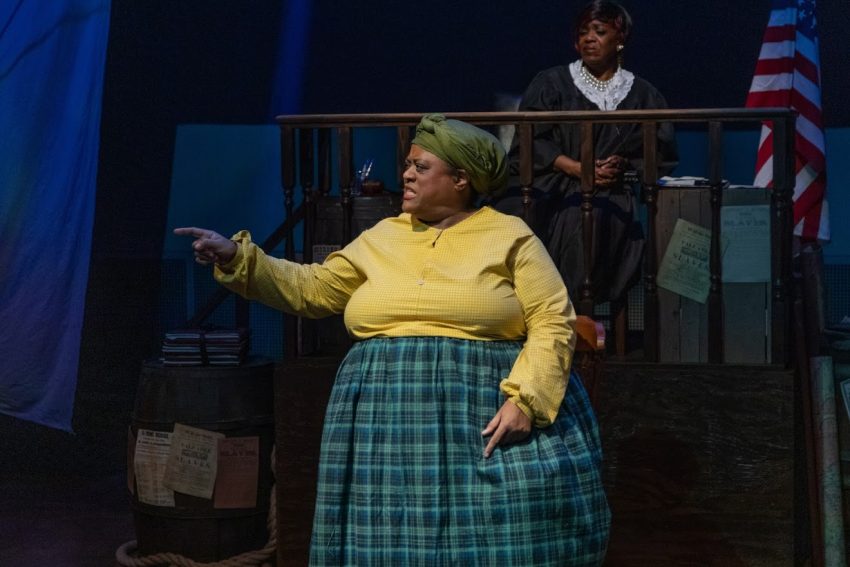 Karani Johnson pulls no punches in her hard-hitting exposè of Black stereotypes. We know well the history of  white oppression since , but her “The Trial of One Short-Sighted Black Woman vs. Mammy Louise and Safreeta Mae” reveals  Black people’s prejudices against each other.

Johnson’s play offers strong medicine—a tonic and inspiration for those who believe in social justice. Director Sherri Young brilliantly lays the foundation for a deeper understanding of how Black women blossom into warriors for change.

The striking set juxtaposes a courtroom with a slave ship. Behind the judge’s bench, we see three large sails, with coiled ropes and ship lines evoking the chilling representation of a slave ship. Video Designer Kevin Myrick uses the sails to project compelling images.

In court, the sharp-tongued executive Dryer accuses Mammy and Safreeta of accepting their subservient roles and hindering her own climb up the corporate ladder.

Mammy’s country-style Defense Lawyer (brilliant Brittany Nicole Sims) rails against the insulting accusations. We laugh out loud at their City vs. Country humor. No-nonsense Judge Judy Gardner (powerful Clara McDaniel) keeps them in line as the testimony turns serious and arguments burst out.

Multi-talented Devin A. Cunningham skillfully plays five roles, putting on a white mask to assume the role of Slaveholder—a black man in white face. As a callous, southern gentleman, Cunningham is horrified that a judge can be Black and female!

Mammy’s lawyer forces Dryer to admit that she knows nothing about the Harlem Renaissance or Zora Neale Hurston. Dryer has Toni Morrison’s book “Beloved” but could read only a few pages. The elegant corporate woman has no time for Black history or books.

As we learn more about Mammy and Safreeta, we are shocked by the cruelties they have suffered. They are the epitome of strength embodied by Maya Angelou in her poem “Still I Rise.”  The Defense argues that young Blacks must learn their true history. They must read Black writers to preserve their heritage. Magnificently, Dryer finally awakens to her own short-sighted corporate life.

For a powerful ending, the cast intones the names of slave ships that flash on the screen: La Amistad, Antelope, Aurore, Esmerelda . . . The ships’ flowery, innocent names turn sinister when we comprehend that they have brought generations of pain and torture. African- American Shakespeare Company presents the perfect play for Black History Month.