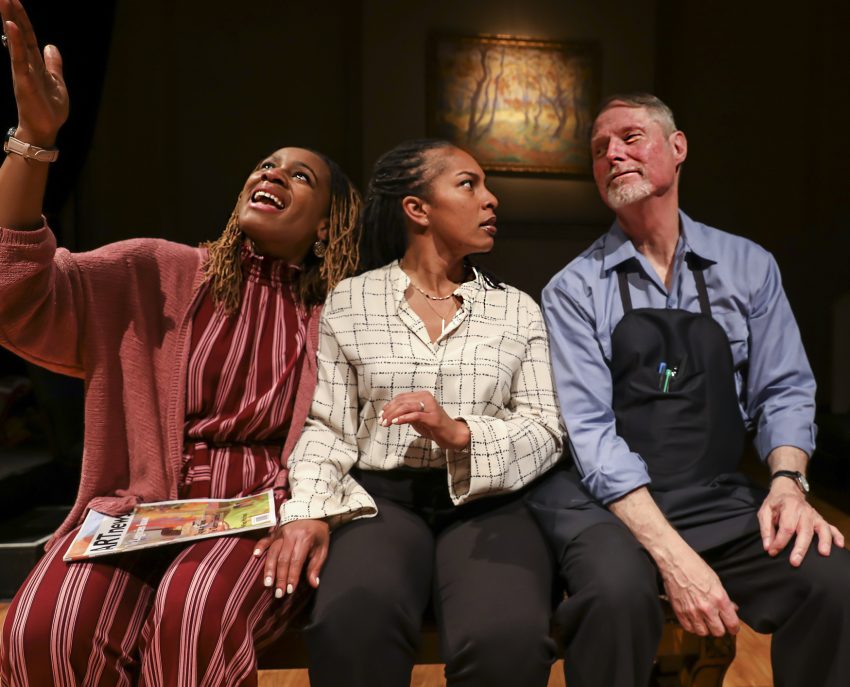 To cancel or not to cancel—that’s the question at the heart of “The Human Ounce,” which exposes an Impressionist painter as a sexual predator. The sex scandal is based on Gauguin’s bad behavior in Tahiti. Nicole Parizeau’s new play grips us with her whip-smart investigation about the danger of policing crimes from the long ago past.

The #MeToo movement, and “Cancel Culture,” have arisen to boycott prominent offenders, banning them from public life because of criminal behavior. In this new social space, two museum curators grapple with the terrible acts of a popular 19th Century master.

At Julia Morgan’s “Little Castle,” Central Works’ intimate show follows museum curator Biz (Kimberly Ridgeway) and her museum educator Jory (Champagne Hughes). An impressionist painting of a forest hangs on the wall, and a copy of ARTnews rests on the viewing bench.

When Jory reads Biz the scandalous ARTnews story about long-dead Arthur Gelding, their most famous artist, Biz is shocked–so are we. Gelding has been exposed as a child rapist. Younger, hot-headed Jory believes Gelding’s painting should be removed, immediately! Older, more practical Biz thinks the artist’s work can be kept separate from his terrible acts.

Ridgeway and Hughes are superb as warring friends.  Motherly Biz reminds Jory that “keeping the museum open means keeping it staffed, and … funded enough to expand, or buy new works.” She attempts to stay pragmatic while Jory becomes more insistent that the painting be removed.

Biz’s love for art shines when she loses herself in Gelding’s painting, her fingers nearly brushing the canvas. She muses whether a specific brushstroke is “deliberate, or just a happy accident.” We feel her suffering over the conflict.

Jory and Biz start out with a civil, good-natured discussion, which deteriorates into a contest of wills—neither will change her mind. Their increasingly heated words captivate us. Director Gary Graves raises the stakes as the actors circle each other.  It’s a wild, escalating encounter that explodes in front of us.

My head swiveled from actor to actor trying to take it all in. Their intensity is disorienting, as their arguments swirl around us.

“The Human Ounce” refers to the supposed weight of the human soul, suggesting the human cost of Jory and Biz’s dizzying debate. Jory claims that Biz lacks “guts” and “courage.” Biz accuses Jory of falling into hypocrisy, “widening her tightrope” when it suits her.  Their conflict leaves both deeply wounded, making us ask: Is it worth it?

The third character, Dodge (Don Wood), the museum’s handyman, chimes in intermittently, without much to say. He dodges the question, relieving the tension; but he feels like extra baggage. Painted as down-to-earth and kind of simple, he resembles a liberal’s view of a Trump voter.

Although Parizeau shows “cancel culture” as ill-defined and often overbearing, she stokes conversation and reflection, rather than casting judgment. After the play, my friend and I had our own debate about policing the past, and its effect on our psyches.

“The Human Ounce” invites us to join the conversation about past crimes, and to collectively move past them into the present.