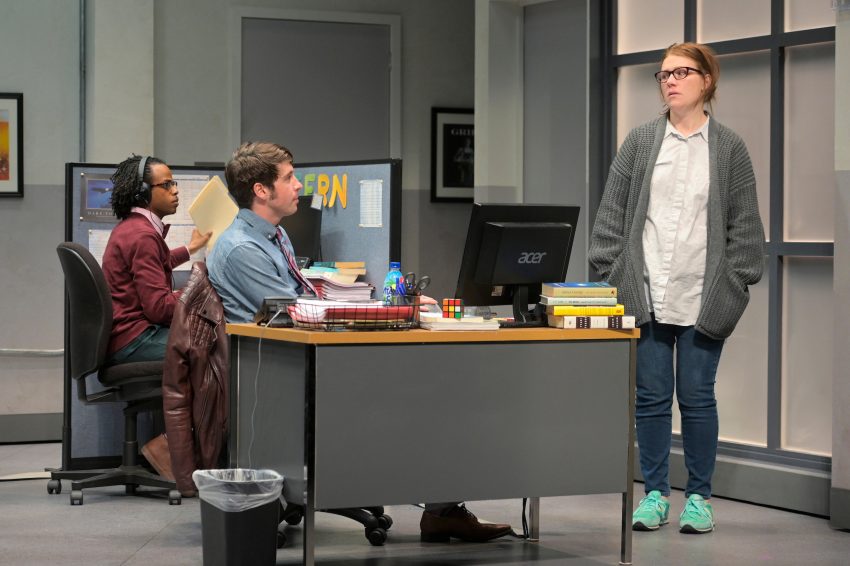 “Gloria” leaves us thinking about the rat-race that Millennials face—how exploited their lives can be. Branden Jacobs-Jenkins’ witty comedy makes delicious fun of their high-pressure bubble. The office competition has destroyed these zine writers’ human sympathy—even for each other.

These copywriters keep up to date on the latest gossip, slavishly following pop trivia and converting it to MONEY—via Tweet, Instagram, and ads. The lowly writers yearn for real work because their souls are shriveling. But they fight over a singer’s suicide like brats in a sandbox.

The hilariously competitive “office culture” is beautifully realized. The realistic cubicles are meticulously personalized with Playbills and posters. And someone has strung rainbow letters to spell “INTERN.”

But a shocking crisis descends on them all—changing each in strange, unpredictable ways. Writers, editors, and bosses—all see themselves at as the center of the crisis, making for brilliant satire. Who will manage to grab more sympathy as a star “victim”?

Sardonic Dean (uproarious Jeremy Kahn) rakes the young intern Miles (enthusiastic, lovable Jared Corbin) over the coals, calling him a “baby Ivy League fucker” behind his back. Kahn turns in a brilliant job as the nearly 30-year-old, trapped editorial assistant. He attacks his co-workers, raising the stakes with witty cynicism.

Spot on Martha Brigham, as Ani, the 24 year old newbie, tries to please everyone. Ani’s curly hair complements her soft, “pretty nerd” vibe. Watch for Brigham’s distinct disguises: as Sasha, in sharp red lipstick and straight short hair, she’s tight-lipped and all business; and as Callie, she’s a blond and bouncy Hollywood gofer.

In Act Two, all six actors change artfully into new roles, or new versions of themselves. Each actor changes–with great make-up and costuming–making us look for connections. Playwright Jacobs-Jenkins shows his genius in the ideas that link each role with the next—letting us ponder the patterns.

Lauren English nails two opposed characters—Gloria, a depressed office outcast, and Nan, a sunny, smug editor. English makes each role distinct and provocative. Her Gloria is downtrodden, tight as a spring; while her Nan is elated and privileged. “Gloria” invites us to compare the worker’s life with her boss’s, in English’s magnificent portrayals.

As Kendra, the annoying fashionista, Melanie Arii Mah is funny, defensive, and destructive. Her morning shopping and trips to Starbuck’s leave no time for actual work. In a crescendo of insults, Dean attacks her: “Kendra, you’re a rich Asian girl from Pasadena with a degree from Harvard. That is essentially a privileged straight white man.”

As a fact-checker up the hall, Lorin (sympathetic Matt Monaco) suffers nobly from the rancor that streams loudly from the writers’ cubicles. Lorin also turns up after the crisis, changed and enlightened.

Playwright Jacobs-Jenkins invites us to have compassion. Sparkling “Gloria” urges us to consider our roles because a little empathy can avoid disaster—whether it’s 9/11 or office politics. Director Eric Ting’s “Gloria” embraces superb acting, timing, and design to produce a comic masterpiece at ACT’s Strand Theatre. Even their shoes are shocking!