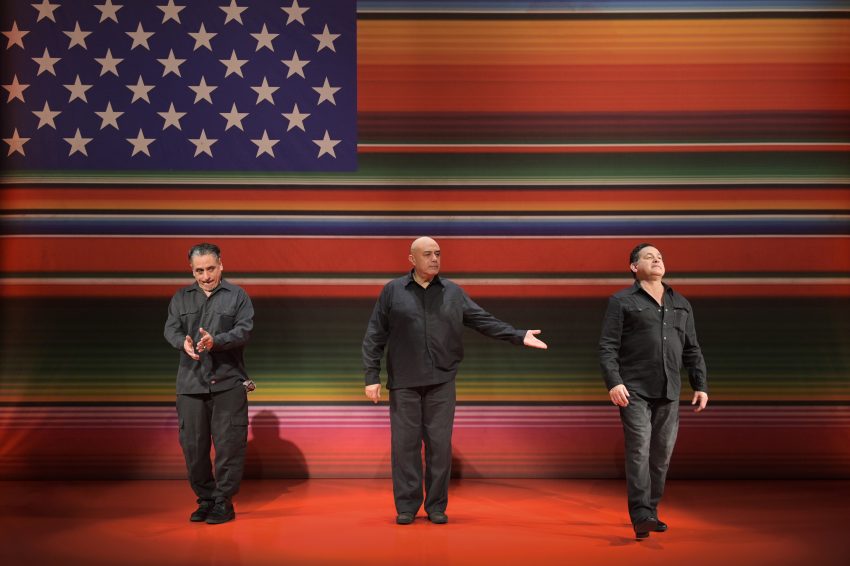 Thirty years ago, in the Mission, I discovered “Culture Clash”—a trio of talented comics who offered a hilarious, irreverent, and biting political view of U.S. life from a Latino point of view.

In a series of new sketches, Los Clasheros— aka Richard Montoya, Ricardo Salinas, and Herbert Sigüenza—perform with a passion. Their urgent questioning and comedy about social justice befits our troubling times—still.

Today’s deplorable immigration policies encourage family separation and child incarcerations, harsh realities that provide a dramatic thread for Culture Clash’s impressive new show. At one point, they ask: “Is this an ‘America” we still want a part of?”

At the same time, they guide us on an amusing romp through our multi-cultural, multi-gender, multi-everything era. Years of performing all over the country has sharpened their characters and perspective. They have conducted interviews with Americans along the way, and those talks have found their way into the new show.

“Los Clasheros” are more “mature” today—just like their faithful followers. They’ve attracted new fans, too.  They are happy to skewer both left and right.

We know we’re in for a satirical treat when we see a huge, projected American flag as the backdrop. But instead of the red and white strips, this flag sports brilliant hues from a Mexican sarape. Floating above the flag, three illuminated stars, brighter than the rest, represent Guess Who?

Director Lisa Peterson ties it all together with polish, style and insight. The mood of the audience changes each time the actors change characters. We go from somber border immigration scenes, to hilarity in others. Los Clasheros change roles, genders, opinions in a flash!

Poet Richard Montoya morphs from an inconsolable, immigrant father whose daughter is wrested from his arms, to a bewildered Muslim father and Uber driver whose children worship Allah and Nike.

Composer and Sound Designer Paul James Prendergast provides lively salsas and merengues in rapid, exciting succession. If we weren’t expected to sit still, we might have all jumped out of our seats to bust a few moves!

I’m glad that Culture Clash is (Still) in America, speaking truths that our Latinx community will not abandon: our homes, our cultures, and our always dependable sense of humor.