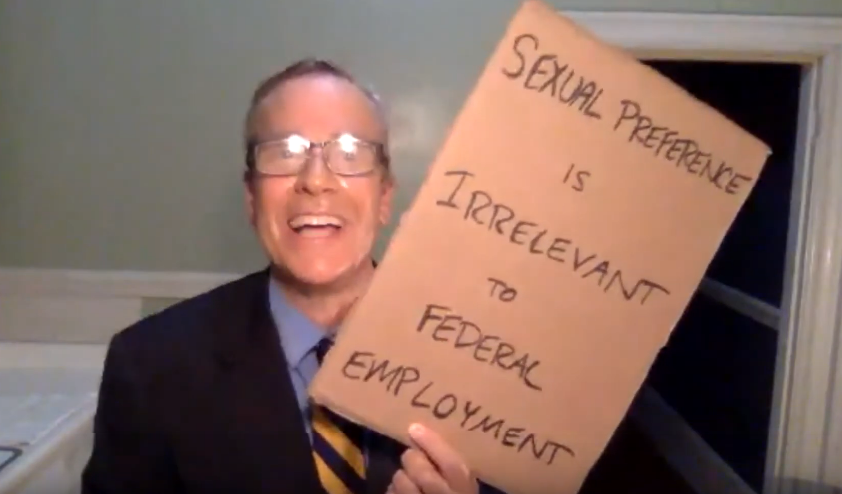 With amazing virtuosity, the incomparable John Fisher writes and performs so many characters and aspects of Kameny! We watch him smoothly switch from soldier to bureaucrat to protester in a flash of inspiration.

After his heroic duty as a front-line soldier in WWII, Kameny attends Harvard in 1946, and studies the luminescence of planets.

Through his star gazing, a life-altering realization shatters his universe. His inner brightness—his gayness—is continually oppressed by the external world. Kameny realizes that branding homosexuality as “mental illness” suffocates its victims. The psychiatrists follow the Church’s attack on homosexuals as “immoral.”

Doctors and churchmen plunge gays and lesbians into self-loathing, a lonely darkness. Kameny believes that gays must step out of their closets and face their oppressors.

Working successfully for the Army as a government astronomer, Frank is arrested cruising in Lafayette Park, in D.C.  In 1957, Kameny is fired from his job because he is homosexual. But he is not ashamed—he is motivated!

Frank turns himself into a fulltime gay activist, the first openly gay person to picket the White House. He brandishes a cardboard sign of protest that says: “Sexual preference is irrelevant to federal employment.” More and more people join him.

Frank orchestrates a daring tactic to influence the members of 1972 American Psychiatric Association conference in Philadelphia, Pennsylvania. Doctor John Fryer, a gay psychiatrist, wearing a Nixon mask, shares his own heart-rendering story with the APA about how gays are mistreated. Many gay psychiatrists, men and women, are sitting in the audience. Still today, I sympathize with gays who are afraid to combat social injustice and live in hiding.

As a psych student in 1972, at Fairfield University in Connecticut, my sense of social responsibility was born, and I recall that conference. Many psychologists disputed the Psychological Diagnostic Manual’s description of homosexuality as “paraphilia”—abnormal, dangerous, sexual desires.

On December 15, 1973, 58% of APA doctors vote to remove homosexuality as an illness, a day that Kameny describes as “the day we were cured en masse by the psychiatrists.” Slyly, Fisher’s Kameny adds, “in a moment 20,000,000 homosexuals were cured. It was the fastest working vaccine in the history of mankind.” Fisher brings a smile to all of us.

Learning from the 60s sexual revolution and civil rights protests—including the Roe vs. Wade decision— we stood up for gay rights. We learned more about the social oppression, the power of bias laws to make groups of people feel degraded and powerless.

Kameny gains strength from Harvard’s world-famous astronomer, Cecilia Payne Gaposchkin who opposed her male counterparts. Going against their theories, she provides a new theory of the planets. If she can overturn entrenched beliefs, so can he!

Fisher reminds us, especially today, of the power of steady protests, and the changes it brings to social justice. As playwright, performer, and director, John Fisher weaves a rich show about a little-known hero. A must see.