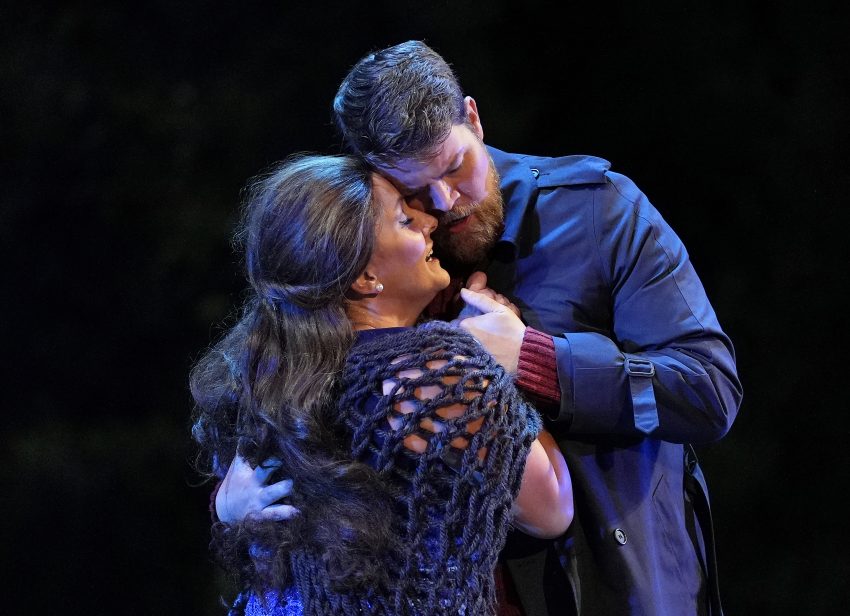 West Edge Opera’s new production of Leoš Janáček’s “Katya Kabanova” premiered July 24, in the Bruns Amphitheater, the first of three operas of their 2021 Festival. This is my first live performance since the pandemic, and it does not disappoint.

Janáček’s voluptuous, melodic score accompanies West Edge’s theatrically sparse production of this classic psychodrama, making up for a lack of the typical visual effects and accoutrements found in modern day opera. While I was expecting way more visual stimuli, I convinced myself that austerity seems quite fitting after a year and a half of quarantine.

Director Indre Viskontas dispenses with lavish sets and outrageous costumes. Instead, she offers a pared down production—a simple set of large blue walls and a single door frame the entire stage. Five large potted bushes are brought to the stage by Slavic townspeople denoting outdoors—that’s it.

Costumes are extremely simple and define the characters. Carrie Hennessey’s Katya wears an odd blue party dress with only a waft of tulle to suggest her as star of the show. The lead male roles sport tweed and jackets to distinguish them from black- and brown-clad townspeople.

Stage lighting is straight-forward, no screen projections or tricks here, just simple light to let us watch the performers.

Janáček’s score is the real star of the show and the performers do it justice. Carrie Hennesey’s Katya is a marvelously controlled soprano, whose velvety voice is as strong in the quiet moments as when she really belts. Boris, her lover, performed by Chris Oglesby, a San Francisco Opera regular and a top-notch tenor, brings a bit of richness and depth to the romantic moments of the frugal production.

However, a special mention must be made for Kristin Clayton’s Kabanicka. She is the perfectly wicked, controlling mother-in-law. She literally puts the B in “bitch,” and we get to see how much fun she has—playing an outright sadist.

Music Director and opera veteran Jonathan Khuner carries the show, along with Janáček’s luscious score. Khuner has been with West Edge Opera for years, as well as the San Francisco Opera and New York’s Metropolitan Opera, among others. His commanding direction delivers a delicate and moving presentation of Janáček’s music that meets the emotions of the tormented and overwhelmed Katya.

Perhaps at another moment in time, I would have sorely missed all the visual pomp and circumstance of typical opera; but in our never-ending Covid world of experiential reduction, I enjoyed this production quite well.