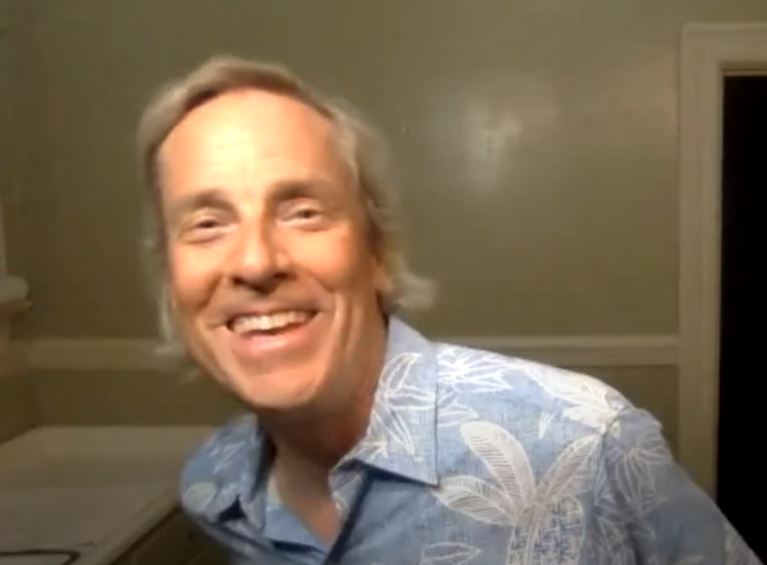 Imagine the creativity, stamina, and drive it takes for one person to write, act, direct, and produce, a solo play every week for over a year.

John Fisher, Executive Artistic Director of Theatre Rhinoceros in San Francisco, took on this mind-boggling feat in his one-man shows during the Pandemic. He has produced 62 plays—one every Thursday night from March 2020 to May 2021. The shows are still FREE online at therhino.org if you want to sample them.

Fisher battles enemy armies in his small kitchen; he climbs hills atop a shaky six-foot ladder; or, sails into shark infested waters at the Farallon Islands in a hand-made cardboard sailboat. Beads of sweat slide from his brows as he works his lines. Wind, rain, and all manner of man-made special effects emanate from his voice. His acting and technical skills blend beautifully with clever scripts.

These one hour wonders engage, entertain, and educate. I have been amazed at his audacity and skill at pulling each installment together. All year I wondered, “What will he think of next?” He springs from genre to genre, from his memoir laced bike ride to “The Farm” to a murder mystery in “Doodler.” Fisher pursues the unsolved Castro murders and updates us on the lives of George Washington, the architect Philip Johnson, and the ground-breaking gay hero Franklin Kameny. There’s no end to his curiosity.

I have viewed and reviewed Fisher’s Essential Service Projects and got hooked. I wondered what started him on his innovative path.  How did he muster the ideas to bring us something new each week? What did he discover about himself through the ESP during the Pandemic?

We met on Zoom after the one-year anniversary of his Project. He was sitting on the familiar leather couch against the wall, smiling. His Haight apartment is his studio, and its rooms, his set.

PLM: What prompted you to create this project?

JF:  When the pandemic hit, theaters were shutting down.  I could feel the depression. I didn’t want to be dragged into the lethargy of isolation. So, I decided to challenge myself to move onward, to make theater persevere. Audiences have come along.

How did you choose what you would write? The plays are so diverse.

Ideas form after each production end. Things that fall into my head … like a friend I was thinking about that I haven’t seen forever, and some weird stuff had happened to us… I’ll do a play about that.

Do you have a set format?

When I started out, I didn’t have a format, it was just separate ideas … Then I started doing series, call them threads … For example, when I go out on my bike at night, and talk about the history of a neighborhood, that was my bike journey thread.

John mused for a bit over the changes in his pieces. He discussed beginning to blend history with current events, while weaving in his personal experiences. He developed that formula.

“Not sure when that format change happened. It was organic … but there always is a research component. It can’t just be a personal memory thing. And everything has an element of being gay … or I establish myself as gay by including stuff about my husband.”

Do you like playing all the parts, including being the narrator, as you do in “Seduction?”

“In Seduction” I loved that I was just the guy, never the girl he was seducing … I created the girl with my words and reactions. The audience had to imagine her and figure out what she was to me. I’m not sure she was really beautiful, but she was beautiful to me.”

Do you have any favorites?

Well, the first, “A Tourist in Hawaii,” is one. I was terrified, then I did it! You just keep doing it and a certain kind of magic happens. Most adventurous was “Shark.” I ordered the life jacket, other props, and watched all these shark movies. I was literally watching those flicks through my fingers. I was horrified!

But there was one I loved doing, called “Majeska,” about a Polish actress in San Francisco. I loved playing the woman—no drag … she had such a fascinating career. She brought Shakespeare to the gold miners, the 49ers. I loved performing it!

What do you think about Zoom?

I’ve never done anything like this. I haven’t been bored since COVID began. When things got dark, at election time, when things got miserable, I thought, “I can’t get depressed. I can’t get wrapped up in the news. Got too much to do.” … Perversely, it’s been an incredible experience. I have to thank Zoom. So, Zoom is my hero.

What did you learn from your adventure this year?

For a long time, I thought a play was a certain kind of thing … I used to think that solo performance was like stand-up comedy. I was kind of snooty about it. I didn’t take it seriously. I thought, “Why not just put on a play?” But now I have such a love for the form. And I’ve gotten over my fear of computers and tech!

Do you have plans for next year?

I’ll be doing the Essential Services Project in New York City, where I’ll be living with my husband for six months starting in September. I’ll be running The Rhino remotely, which is what I’ve done with my Rhino associate Joe Tally all through COVID.  I’ll still do the BIPOC shows, because it is the subject now—the pursuit of equity. People want to be heard … I can contribute by putting on their stories.

Fisher is the Executive Artistic Director of San Francisco’s Theatre Rhinoceros, the longest running gay theater in the world. You can see his ESP plays for FREE at:  therhino.org

Banner Photo: John Fisher in “The Farm” at Theatre Rhinoceros