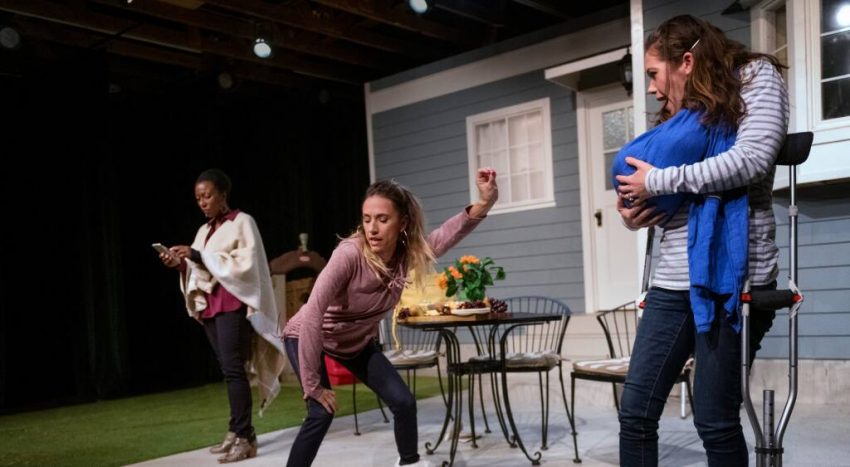 Cinnabar Theater’s powerful production of Molly Smith Metzler’s play exposes not only the demands on new mothers, but also delves into the love between two friends—surpassing gender and class. “Cry It Out” shows the meaning of true friendship at a time when people count their friends by social media ‘likes,’ spilling feelings all over the internet.

From a garden view, we see the back of a small blue duplex, with only a child’s play gym in the yard. Caring Jessie (dynamic Ilana Niernberger), a New York City corporate lawyer, feels trapped in her Long Island fenced-in yard, alone with her newborn. At the Stop & Shop, driven to distraction and loneliness, Jessie rams her cart into her next-door neighbor, Lina (assertive Amanda Vitiello), in hopes of meeting.

Jessie and Lina find a spot in Jessie’s yard where both babies’ monitors work. They soon share coffee and the frustrations of motherhood—as well as tips on breast feeding and helpful mommy devices. Lina dreams of free time out: “Stop & Shop is like going to the prom.”

As Jessie, Niernberger shines as the considerate, anxious mother, torn between being a stay-at-home mom and returning to work.

As months pass, their meetings grow from morning coffee, to “Story time” at the library, to yet another afternoon coffee hour. Their friendship intensifies, sharing deep rooted anger at the changes in their partners and family. I would like to meet their partners to experience the gender divide, but Metzler sticks to the women’s side.

When distraught neighbor Mitchell (talented Andrew Patton) pops into Jessie’s yard, even he does not represent the average husband. Wealthy Mitchell gets to stay at home and spy on them with his telescope.

Needy Mitchell asks them to invite his wife, Adrienne (Kellie Donnelly) over for coffee. A famous jewelry artist, Adrienne has difficulty bonding with her baby and other new mothers.  Resenting her husband’s attempts, Adrienne rants to Jessie, enraged: “People look at me, and because I choose to go back to the studio, I’m the Antichrist.”

Jessie and Lina’s developing friendship is beautifully portrayed through their show of affection: heads resting on shoulders, snuggling into each other, and sustaining full-body hugs.

I am touched when Lina’s economic need to return to work and leave Max, her son, includes leaving Jessie. Lina grabs Jessie, crying out loud on her shoulder.  Jessie and Lina love each other. Even though class, money, and culture divide them, anguished Lina helps Jessie assert her need to stay at home, role-playing an upcoming debate.

This play encouraged me to think about how much time I waste on the internet, when I could be spending time with my few special friends.

“Cry It Out” renews our faith in finding friendship that surpasses gender, class, culture, race, and political differences—it’s a cry from the heart.