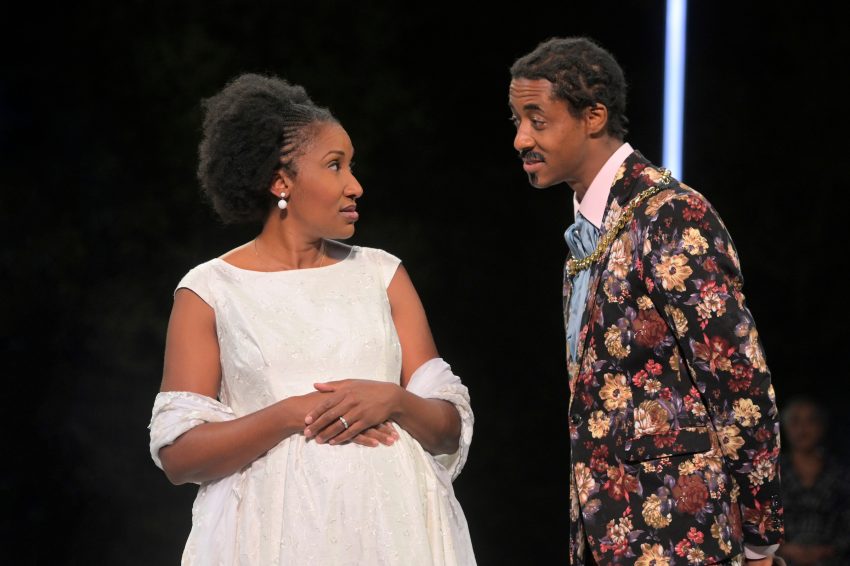 Watching “The Winter’s Tale” at Cal Shakes feels like witnessing two prodigious trapeze artists pull off a miraculous balancing act. At every moment, I’m nervous things are about to go terribly wrong, but watching the performance succeed like a high wire thriller provides explosive satisfaction.

Director Eric Ting and Dramaturge Philippa Kelly’s bold adaptation of Shakespeare’s romance bravely confronts head on the sharp split between Part One and Part Two. Expertly, the co-adapters have melded the first, an intense psychological drama, with the second, a raucous comedy.

Ting and Kelly stage Part One in Sicilia with a moody and capricious tone as we watch a devastating family tragedy unfurl. After the intermission, we leap ahead sixteen years to cheery Bohemia, where Shakespeare flips to extravagant comedy hi-jinks—and delivers a controversial climax.

The set of Sicilia is stark, with eerie white pole lights that look like barren aspen trees. Anxious King Leontes (austere Craig Marker) rules over a colorless kingdom where paranoia can easily fester. Designer Ulises Alcala dresses Leontes and his court in striking black and white, to reveal the limits of their thinking.

In a totally different fashion, the Bohemians all dress in a style best described as disco meets commedia dell’arte, complete with luxurious codpieces. The suits and gowns overflow with flowers and brilliant colors.

In Part Two, a desperate and morose Leontes stages a play to placate his guilt and grief at losing his wife Hermione (profound Safiya Fredericks) and their son. The whimsical set of Bohemia looks intentionally low budget, reminding us of an old-fashioned pageant wagon mixed with the stylings of children’s theater. The wagon rolls on, drops its makeshift stage, and lo—a raucous comedy spills out—fit for a king.

As Paulina, the Queen’s lady-in-waiting, Cathleen Riddley gives a standout performance, as she indignantly condemns Leontes for his brutal misogyny. While Paulina is obviously furious with Leontes, Riddley adds tones of grief, even pity, showing us that she thought this man once deserved admiration.

As Hermione, Safiya Fredericks absolutely staggers us as the fierce queen, capturing us to her cause during the disturbing, pivotal trial. Fredericks delights, as well, in a comic vein in Part Two, when she plays the wily King of Bohemia.

The whole cast does an outstanding job convincing us to grieve the fall of Leontes. We watch Leontes’ advisors strain to make him see reason, particularly the masterful Victor Talmadge as kind-hearted (and famously ill-fated) Antigonus.

By the end of the play, Ting and Kelly ask us to question whether the chastened Leontes deserves a cathartic ending. Can sixteen years of regret and mourning absolve his reckless, deadly behavior? Even when a final glimmer of hope arrives in the form of a resurrected Hermione, we are intentionally left wondering whether it’s yet another fantasy.

I loved the ambiguity of Ting’s “The Winter’s Tale.” Rather than forgiving Leontes, Ting critiques the ruling class, showing that selfish, evil actions cannot be undone.

Ultimately, Paulina puts it best: “It is an heretic that makes the fire, / Not she which burns in’t.” In an age where loathsome, powerful men frequently invoke images of “witch hunts” when held accountable, Shakespeare reminds us to demand justice.