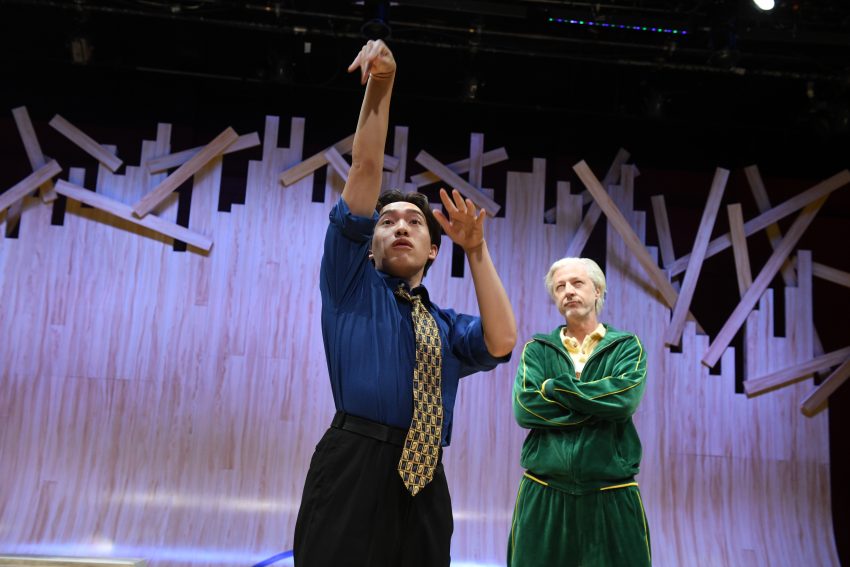 Lauren Yee Pits U.S. vs. China in a “Friendship Game”

Lauren Yee’s unique play “The Great Leap,” at The Stage in San Jose calls our attention to winning and losing, and the power of political expectations. Yee uses China’s and America’s basketball craze to portray the political and personal conflict in vastly different cultures.

Her title refers to Chairman Mao’s Great Leap Forward, a plan to develop China’s industries at lightning speed, as well as to a spectacular jump shot in basketball. Yee melds sports and power in one historic dunk.

In Act One, we meet Saul, a foul-mouthed but caring University of San Francisco basketball coach (dynamic Tim Kniffin), who is invited to Beijing to teach basketball. His student is new coach Wen Chang (powerful Alex Hsu), who wants to learn the game “American style.”

Hsu, as Chang, narrates the story in a stoic tone which mirrors the cold, undeviating nature of his government. No one behind the Great Wall is allowed to take risks. That, to the Chinese, is losing. Chang admits, “They do not want to miss, so they do not take the shot.”

But loose San Francisco Saul preaches, “It is always your turn … and a free throw—does not make it free.”

The conflicting ideologies are well played by Hsu and Kniffin. We feel for both as they challenge each other’s methods. Yee’s focus on their personal lives is sketchy, and some of her connections of events raises my brow. But her spotlight on the power of political influence on personal goals is right on the mark.

Inadvertently, though, Saul angers the Chinese government by proclaiming they will never beat America on the court. But 18 years later, he faces the game of his life. Saul must win a “Friendship Game” to keep his job and self-respect. But Chang, now a formable challenger, will lose his rank in the Communist Party if he does not win.

In Act Two, emotions run fast. The international news covers both the game and the shocking student protests for Democracy in Tiananmen Square. TV cameras crowd around the stadium, and we see the student protest on screen. They want to take risks and be themselves, yelling: “USA! USA!” At the same time, we hear a realistic radio broadcast of the severe police crackdown.

The game builds to a tie.

Saul has an ace up his sleeve, Chinatown street-hoop prodigy, S.F. teenager Manford Lum (exuberant James Aaron Oh) is playing hard. Lum, who cleverly maneuvered his way onto the US team, has a secret reason for being in China. The play’s personal and political impacts intertwine with Lum’s quest.  Lum, like the Energizer Bunny, constantly heightens the tension.

Christopher Fitzer’s impressive abstract set design draws us into the on-court action. The commanding aquamarine wall, splintered at the top, highlights the geometrical court, as if the Great Wall were splitting.

When Lum is benched by the Chinese government, his persuasive foster cousin (talented Monica Ho) encourages him to play anyway. Go for the win!

Director Jeffry Lo keeps the pace quick, and the characters centered on their goals. We are rooting for them all the way.

See “The Great Leap.” It surprises us with questions about freedom and cooperation. We hold our united breaths until the emotional final free throw.