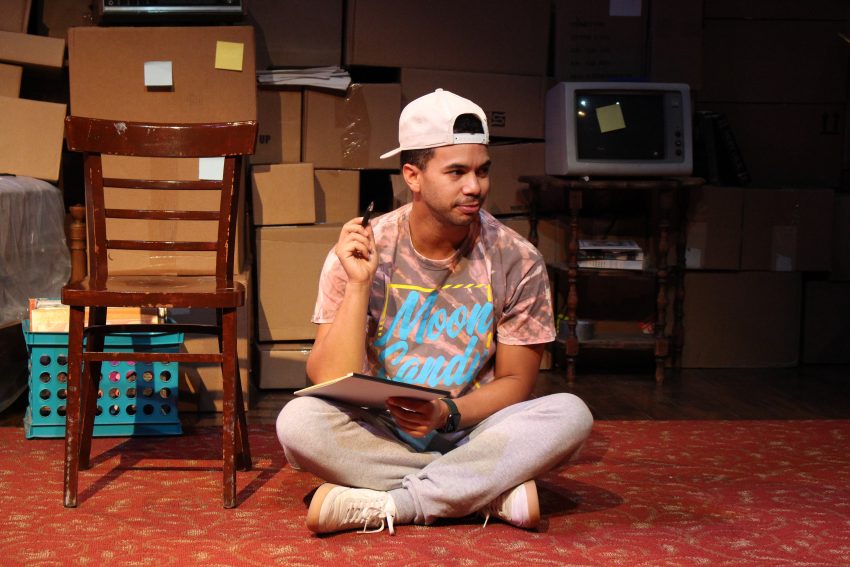 We all hope we can be as resilient and warmhearted as the Narrator that William Hodgson ardently brings to life in this stunning one man show. Hodgson is our own Tom Hanks.

In Macmillan’s “Every Brilliant Thing,” Hodgson is charming, warm, and intriguing.  As the boy whose mother attempts suicide, he starts at six years old to make a startling list to cheer her up. Macmillan developed this audience-friendly script at the Edinburgh Festival, working with comedian Jonny Donahoe. An international hit, Director Michael Socrates Moran keeps the script moving and always connecting with each of us.

The boy faces tremendous guilt, as we learn how his mother’s severe depression creates life-long problems for him.

He reads some inspiring items to us, directly, and includes us in his evolution, starting with:

1. Ice cream
2. Kung Fu movies
3. Staying up past your bedtime and being allowed to watch TV

In the cozy living room set at Oakland Theater Project, with a ready smile, Hodgson roams easily in in front of stacked boxes with stick’ems—and more tags on a bed, a turntable, and a mirror. He’s in transition.

With a sparkle in his eye, Hodgson carries off this intimate one man show with grace and flair. He goes through befuddlement, self-doubt, rejection, fears of all kinds—and we go with him, happily.

He reaches deep into our psyches. We see how a depressed mother’s emotions affect a growing child—creating turmoil as he struggles to establish connections of his own. We feel the price of her depression upon her growing son.

We are drawn in to read aloud from his ever-growing list, or to briefly play his Dad, the vet, a teacher, or a sock puppet. Every step of the way, Hodgson makes us part of a his character’s conflicts.

As he discovers the miracle of LISTS, The list grows and matures, too. It’s a wild ride—worth seeing again.

On your card, you may have:

The answers are hidden in the lists, as he grows from a little boy to a distressed teenager, to a college student, and a fitfully romantic young husband. He’s awash in storms of indecision—which stem from guilt and self-accusations about his mom’s condition.

As we go through adventures with him, he chooses more and more grown-up items. When the list of things we love reaches astronomical size, we begin to understand the logic and evolution of his list.

It seems wonderfully random—but there’s a method, a poetic logic in the imaginative music of the list itself. The list marks what the boy loves, and how he copes—in a roller coaster life.

We all seek “Every Brilliant Thing’ we can to convert ourselves to sanity and wholeness—and we never wholly succeed. When you look closely at the list of a million items, you will see that the boy could be you or me.

We feel like he’s our son, our brother, our cousin. Hodgson has mastered the trick of making us friends for life. Don’t miss the incomparable William in the role of a lifetime. He will welcome you with a smile.