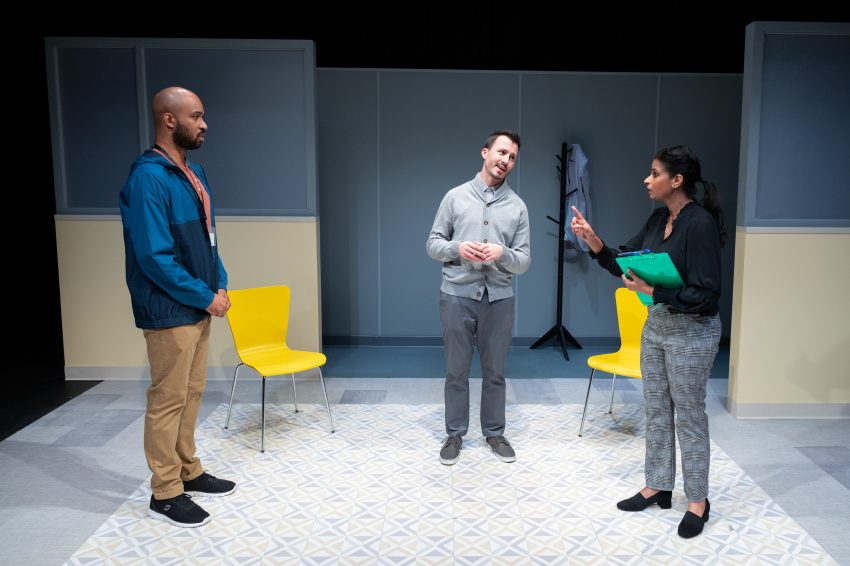 Usually, a Kafkaesque dive into the absurd world of the political asylum system would absolutely be my kind of play. But in “The Claim,” British playwright Tim Cowbury is so focused on pushing our limits, the story itself suffers.

Language is a precious tool that can bridge our differences or batter us like a cudgel. Demands for purity of language form a mainstay of fascistic regimes and right-wing politics. Each week we see stories about people subjected to hate crimes simply because they were speaking a foreign language—even more common during the pandemic as people target the AAPI community.

In “The Claim,” Tim Cowbury makes a bold attempt to show how small misunderstandings between speakers of different languages can have massive consequences. Cowbury’s play dials up the extreme discomfort we feel when trying to communicate in a language foreign to us.

Cowbury’s play begins with Serge (haunting Kenny Scott) staring out at us, provoking an increasingly uncomfortable silence—a scarce commodity once the rapid-fire dialogue starts rolling out. A Congolese refugee who has been living in London for many years, Serge tries to regularize his asylum in the U.K.

Kenny Scott’s outstanding performance acts as a much-needed anchor through our surreal journey. Scott masterfully captures Serge’s emotional transition from a hopeful optimist to a dispirited cast-off of a broken, cruel system.

When Agent A (memorable Soren Santos), a translator, walks onstage, he goes off on endless tangents, hardly listening or letting Serge explain his own case. At first, we sympathize with bumbling Agent A, who seems eager to help. Sure, he may misinterpret a few words here and there, but where’s the harm? Or so we may think…

But our feelings of goodwill quickly evaporate as Agent A reveals himself as an all-too common, opinionated white guy who loves the sound of his own voice. Just spending five minutes with A proves to be intolerable, much less an hour twenty.

While Serge and Agent A share a lukewarm rapport, stern Agent B (striking Radhika Rao) has no time for nonsense. She’s all business, clearly exhibiting signs of burnout.

In a perplexing scene, B asks A to leave her alone with Serge, despite not speaking his language. Her overbearing “conversation” obviously leads to more disastrous misunderstandings. Like Serge, we feel our tempers rising.

Characters take moments to speak directly to the audience, forcing us to be participants, rather than bystanders. We feel like screaming back at the British agents in a desperate attempt to make them shut up and just listen to Serge.

Unfortunately, passages frequently sound less like dialogue and more like a wall of sound, as characters constantly interrupt each other. Imagine the cringiest moments of The Office but without any of the humor, tackling the subject of race and xenophobia. If that sounds unpleasant, that’s supposedly the point.

Does this mean the play succeeds?

Hard to say. In the final fifteen minutes we finally begin to hear Serge’s story and our attention is captured, but everything before then feels like such a grind to sit through. We certainly feel a kind of frustration like Serge, but Cowbury wears our patience so thin that the message is lost in translation.