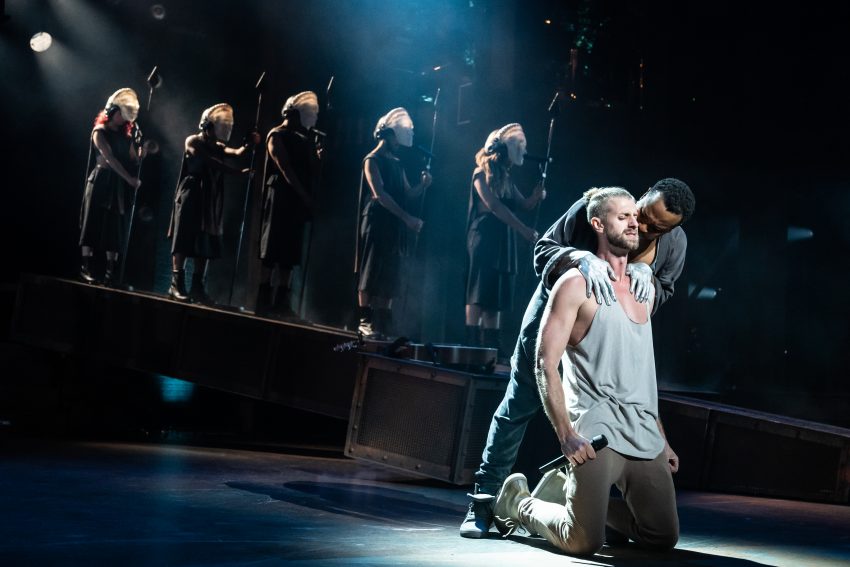 BroadwaySF is throwing a sizzling celebration for the 50th Anniversary of “Jesus Christ Superstar.”  JCS is a multi-faceted extravaganza. So much to see, hear, and feel, in a presentation so uniquely different, and created for today.

After seeing the show in the early 80s and loving its simple placidness, designer Tom Scutt’s spectacular set surprised me with its modern massiveness. The soaring layered steel girders in brown, like an unfinished skyscraper, exude a somber feel. But we can sense anticipation, a hint of director Timothy Sheader’s dark, energetic play to follow.

Music Director Shawn Gough’s eleven-piece orchestra plays on the second level and blares the music to every cranny of the building, making the words of some songs difficult to hear. But the delivery and diversity of the contemporary rock band blend beautifully with choreographer Drew McOnie’s dances for Christ’s frenzied followers. The tempo stays high and fast.

Kin to a concert, we see a guitar-playing Jesus (modest Aaron LaVigne) and Judas (dynamic James T. Justis) conversing in a touching exchange of differences. LaVigne’s “Gethsemane” is powerful as he realizes he will die—”Alright, I’ll die! Just watch me die! / See how I die! / Then I was inspired, Now, I’m sad and tired.”

The musical does not focus on the Gospel, the last days of Jesus, or belabor the crucifixion but concentrates on the broken relationship between Christ and Judas. The story follows Christ the revolutionary, a scrawny Jew, serving the poor and the helpless.

Judas, his deceptive friend, expresses more versatility, and demands more of our attention, as he sings from the top of the girders under a pointed cross. Judas questions Jesus’s revolution and draws us in to question it, too.

As Mary Magdalene, talented Jenna Rubaii exquisitely sings, “Everything’s Alright” with LaVigne, recalling Christ’s promises. We are moved by her tenderness and sweet voice. They bring a message to the poor, the homeless, and immigrants in need of a savior: “Surely you’re not saying / We have the resources to save the poor from their lot? / There will be poor always, pathetically struggling.”

I delighted in the power-hungry Pharisees singing “This Jesus Must Die,” as well as Herod in drag!

Yet a Jew, from the lowest religious caste, evokes miracles to save people from starving, and amasses a fan base higher than anything on Tic-Toc, Instagram, or Facebook. A threat to the upper class, and Herod’s Pharisees, he becomes a hero to the common man, the savior we need.

The shabby brown costumes remind us constantly of extreme poverty, then and now. The people in the streets emerge as the heroes of “Superstar”—as the tireless ensemble reveals the faith and hope of the masses at that time.

The 50th anniversary of JCS is a success as it mirrors the rock of the 70s and echoes, once again, the importance of a hero in critical times.