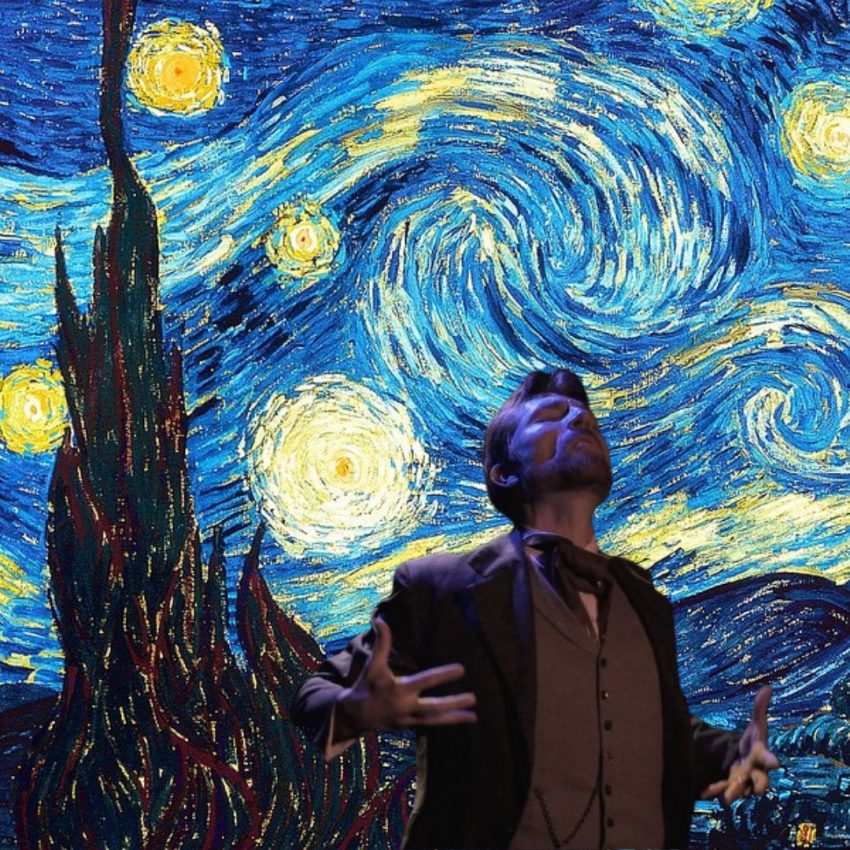 Jean-Michel Richaud shines in “Vincent,” a solo performance highlighting the powerful bond between Vincent Van Gogh and his loving brother Theo, who was also his connection to the art world.

At first, I found Richaud’s acting both Theo and Vincent disconcerting, but Director Jared Sakren uses body movements and changes in voice to help us separate the brothers. Colored lights flare and dim to accompany changes in mood.

As Theo, Richaud thanks us for attending Vincent’s testimonial. Theo is gregarious, charming, and forthright, regaling us with stories from Vincent’s life. Through his voice, we immediately feel his affection for Vincent.

Vincent works in the mines and sleeps on straw while preaching and practicing the word of God. He empathizes with the oppressed miners, and his first drawings are of laborers slaving in the mines. After seeing this work, Theo encourages Vincent to become an artist.

Theo yearned for the world to view Vincent’s work at his art gallery, but Vincent would not allow it. “He could never accept comfort,” Theo shares. Vincent never felt his work was ready to be unveiled.

As Theo walks around the stage engaging us, we sense how wholly he understands his brother. Sending money to Vincent is not a chore, but an act of love. Vincent is constantly unstable; Theo always worrying. Nimoy demonstrates their affection and love, drawing on their letters.

Theo reads the letters while Vincent’s art flashes on the screen. We find ourselves feeling sympathy for Theo, his brother’s sentinel, guardian, and benefactor.

Theo understands Vincent’s need for family, acting as messenger to their parents when Vincent takes in a penniless prostitute and her child. Theo supports all three, but  the parents forbid it.  Richaud replays the brothers’ debate with an anguished voice. When Vincent realizes he must abandon the woman and child, he exclaims, “It was like a block of ice near my heart.”

Vincent’s unpredictable moods often lead to debilitating depression. He tells Theo: “I’m like a bird holed in a cage, that wants to fly.”

Conversing with other artists, like Gauguin, whom he holds in high esteem, brings Vincent happiness. But Gauguin, appalled by Vincent’s mood swings, contributes to Vincent’s depression and death.

Theo guides us through Vincent’s life as a lost soul without realizing the full impact of his dedication to Vincent—until the touching end. Without Theo, Vincent would never have become known to us as a unique individual and artist.

As invited guests, we feel like acquaintances privy to the secrets of not one, but two very special brothers.

I recommend you accept Theo’s invitation to Nimoy’s “Vincent.”