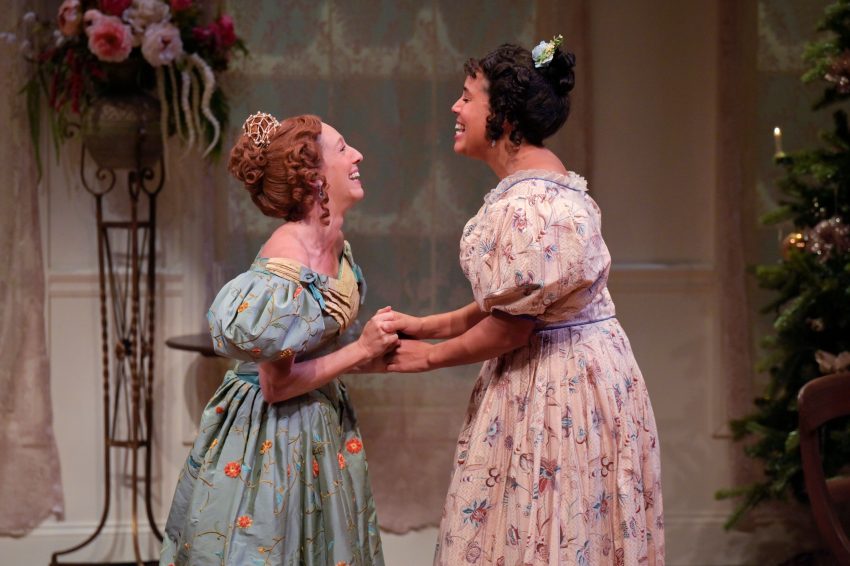 As a person who believes in the universal power of music, I am especially touched by “Georgiana and Kitty” at Marin Theatre Company. Gunderson and Melcon spotlight the two youngest ladies of the Bennet/Darcy clans, as they attempt to end gender bias in women’s music.

As we enter MTC, we are spell-bound by Nina Ball’s amazing, luxurious Romantic Period opulence. The magnificent 1800s piano gleams in a rich wood-paneled library with elegant antique furnishings. A Christmas tree stands boldly with a shining star atop, a new-fangled tradition. Christmas music fills the air.

Planning the holiday, the Bennet sisters skirt around the living room in chaotic holiday glee, in Fumiko Bielefeldt’s lovely gowns to punctuate their characters.

Kitty has added a special gift, a music notepad encouraging her cousin to write her own compositions. Kitty helps Georgiana break into forbidden male territory. As with many talented women artists, other women help them realize their own talents.

But Georgiana lives in fear of the strict rules of her rigid older brother Fitzwilliam Darcy (forceful Daniel Duque-Estrada). Darcy refuses to free her to enjoy her own life and love.

When Georgiana confides that she has invited wealthy Henry Grey (Zahan F. Mehta), an admirer of her music, to Pemberley, they share their joy. Georgiana has composed music for him, converting her feelings into songs, explaining: “Music is in us all. It gives voice to that which cannot be said.”

Whelan sparkles as Kitty, glowing with a down-to-earth warmth. Gaining strength by giving Georgiana support, she enlivens the play with poignant insights. When the two music lovers bumble their way through introductions, Kitty observes, “The way he looks at you is operatic.”

Director Meredith McDonough maintains the flavor, the language, and humor of the Austen era, with passionate musical interludes by composer Jenny Giering.

Georgiana shares the news with her supportive friend Lizzy Bennet (talented Laura Odeh), clever hostess of Pemberley. As Lizzy, Odeh strides gracefully on the set like a welcome breeze. It’s fun to watch Lizzy weave her verbal magic over her husband Mr. Darcy.

In Act Two, twenty years later, despite disappointment in love, Georgiana has been nurtured by her music, and her friendship with Kitty. In a satisfying surprise twist, we find out they have both hidden their wonderful talents for decades.

It takes incredible strength to “come out.” Against devoted Kitty’s advice, Georgiana decides to break the chains of male dominance.

With Kitty as talented business partner, they form “The Society for Women Musicians.” In a brave speech, she asserts, “Music is a universal language. Women should have a voice in all things universal … Music belongs to me as much as it does to a man.”

Under the charm of the Bennet’s family Christmas, Gunderson and Melcon remind us that powerful relationships help foster change, especially for women still burdened by patriarchal rules.