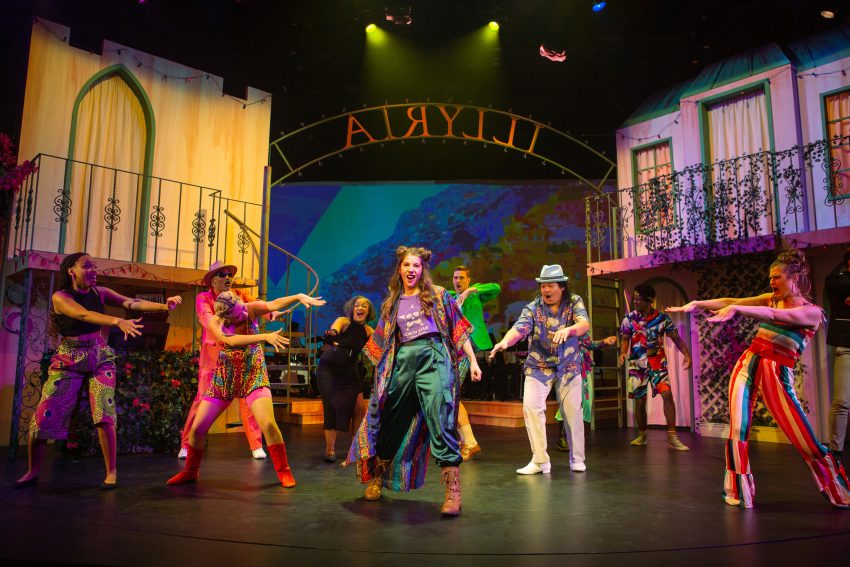 The music modernizes Shakespeare’s gender-bending comedy about a journey to self-discovery.

When Viola/Cesario (ingenious Sophia Introna) sings, “Now that I am wearing the pants, / I’m in love with a guy/ And the girl loves me,” she discovers that as a man, she is far more visible and in charge.

Stranded in Illyria, Viola, disguised as Cesario, cleverly appeals to arrogant Duke Orsino (imperious Sean Fenton). In this ice-cream-colored world, Introna stands out as a clever woman who protects herself from the male gaze.

Olivia, the Duchess next door (seductive Lorena Sinclair) vamps outrageously for the bogus boy, Cesario. Sexy Olivia has no time for the silly advances of Count Orsino.

With Cesario as target, Olivia and Orsino form a hilarious love triangle, as they sing the lovely “If You Were My Beloved.” Sea Captain Antonio (superb Jon-David Randle)  joins in with his ardent reprise, expressing his profound love for Sebastian, Viola’s supposedly drowned twin brother.

As Olivia, Sinclair’s powerful voice resonates in “I Am She,” a satirical song where she confronts Cesario/Viola. They both admit: “I am She …. / Not the person I used to be.”

And Feste, the Fool (Sam Paley, a fine pianist) sings “Is This Not Love?”—affirming the power of unconditional love. And the diverse, gifted street people dance and sing joyous “Word on the Street,” exposing the entitled “elite.”

Pompous Malvolio (versatile Atticus Shaindlin), Olivia’s uptight Chief of Staff, dances comically at the notion that Olivia will marry him, so he can join the ruling class.  In a fun-filled song, “You’re the Worst,” they gang up to taunt Malvolio with his lowly status.

Pink-suited Sir Toby Belch (exuberant Michael Gene Sullivan) drives Malvolio nearly mad. When the abused butler sings: “I could be Count Malvolio, / Watching as my fortunes grow / Getting my due,” we feel sympathy for him, too.

When Viola’s identical twin Sebastian (forceful Bear Manescalchi) pops up, the gender code goes berserk. Viola sings, “Maybe the man I tried to be was the girl I always was!” admitting that that gender flows fluidly.

In a finale, the actors reach out, asking, “Is This Not Love?”  The music has awakened us to greater empathy and openness to all.