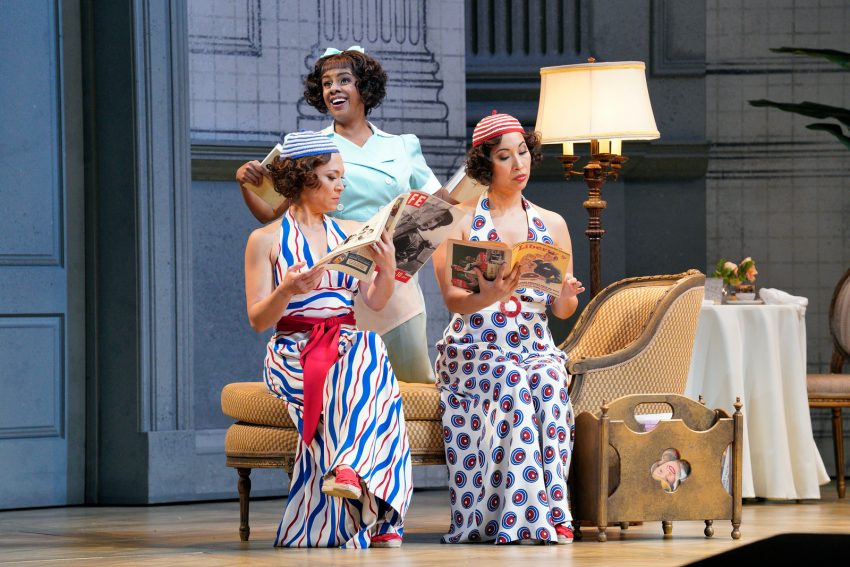 San FRancisco Opera’s production of Mozart’s “Così fan tutte” (All Women Do It, or The School for Lovers) is one the most efficiently fabulous operas I’ve seen. Director Michael Cavanagh showcases the best opera has to offer, all wrapped up in a delightfully funny three-hour extravaganza.

The librettist Lorenzo Da Ponte jam packed all the best operatic elements into this one story—love and romance, gut wrenching despair, hilarious comedy, and even a happy ending.

Of course, Mozart also has a lot to do with it. “Cosi” is one of his best scores—with gorgeously emotive and technically difficult arias; yet much of the music retains the comic spirit of the libretto.

As Fiordiligi, the brilliant Nicole Cabell sings, “Come Scoglio,” the real showpiece of the opera. Spanning two octaves, she claims to be “Like a rock,” yet her agile voice jumps and quivers revealing the parody of the moment.

Two friends, Ferrando (Ben Bliss) and Guglielmo (John Brancy) think their fiancées are the most loyal and devoted lovers. Don Alfonso (Ferruccio Furlanetto) tries to pop their bubble by saying women are all the same: they love the one they’re with. The three men make a bet that, with a bit of deception, Don Alfonso will prove that their fiancées are no different than other women. That’s when the fun begins.

The men pretend to go off to war, but instead disguise themselves as two new “friends” of Don Alfonso. It’s silly and ridiculous—and funny. The madcap farce becomes a screwball comedy.

Fernando and Guglielmo are hilarious as they prance around like SNL’s “two wild and crazy guys.” Bliss and Brancy are both brilliant comedic actors and superb singers.

Amid the antics, gorgeous arias overwhelm us. In a cast of six, Mozart uses all the vocal types: soprano, mezzo-soprano, tenor, baritone, and bass. One of the loveliest arias, “Soave sia il vento,” is a trio—soprano Nicole Cabell, mezzo-soprano Irene Roberts, and bass Ferruccio Furlanetto. The sisters and Don Alfonso sing touchingly about their lost loves.

Tenor Bliss as Fernando, in his S.F. Opera debut, melds his comic genius and a silky voice for a special treat.

As Despina, the maid and co-conspirator, Nicole Heaston is absolutely dazzling. Like the others, it is hard to tell if her singing or acting is better—both are marvelous!

With the twists and turns of plot, both humorous and poignant, Mozart reveals each characters’ humanity. Although the story doesn’t turn out as they expected, all is well.

The superb Chorus Director Ian Robertson concludes his 35-year career with this production. He will be missed.

S.F. Opera’s finest work shines in this essential Mozart comedy, along with the finest staging, voices, and musicianship—a show of great beauty.