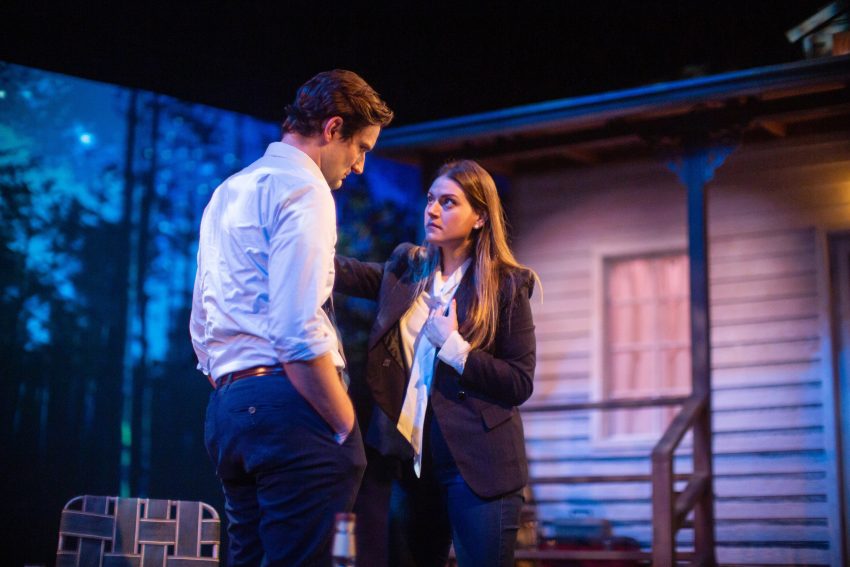 Will Arbery Builds Characters Who Embody Our Conflicts

“Heroes of the Fourth Turning” at SF Playhouse tells a unique story mixing right-wing Catholic college graduates’ ideas and a 1977 doomsday philosophy. Will Arbery wants us to take a hard look at the real differences between liberal and conservative thinking, while unraveling a long list of present-day political issues.

The play moves at a rapid pace with argument over argument exposing the graduates’ opinions, questions, and solutions. I found my head spinning with Arbery’s convoluted arguments and circular reasoning, ending with perplexing revelations.

The four friends engage in an after-party reunion that lowers their defenses. They await their beloved teacher, just promoted to President, whom they have not seen in years. The unraveling begins immediately, revealing each character’s suffering. All the characters, except elegant President Gina (articulate Susi Damilano), expose their tortured souls.

Damilano plays the professor with a double-edged sword of judgement, leading to surprising revelations.

Tormented, drunken Kevin (adroit Josh Schell), frantically searching for a spiritual path, demands, “Why do we have to love the Virgin Mary?” He confronts his friends with his growing doubts about religion: “I’m not feeling Catholicism.” Schell’s wavering Kevin beautifully portrays the angst of a “true believer,” pondering both sides.

The play takes several directions based on the torments of the graduates. Tough guy Justin (stoic Johnny Moreno) exemplifies the dualism of the Catholic conflict with a pistol in one pocket and a rosary in another. Justin cares deeply for crippled, suffering Emily (compassionate Wera von Wulfin), the President’s daughter. Hobbling on her cane, elegant Emily professes her love for everyone, expressing her faith through empathy.

Their controversy, rich in blunt, anti-liberal arguments—abortion is murder, L.G.B.T. folks are a threat to Christians, sex before marriage is scandalous—all lead to the “wonders” of Trump and Bannon.

Don’t we all wonder about a pending cultural crisis with the political situation today?

The characters’ intense, visceral responses to religion, politics, and world order ring true for Democrats, Republicans, Fundamentalists, and atheists in this heightened era of fear and confusion. These graduates’ arguments embody our conflicts.

The play leaves us questioning the impact of religion on political ideology and how we handle political debate and controversy. Director Bill English deserves kudos for keeping this speeding train tight and under control.

I was impressed with the superb acting. Josh Schell and Ash Malloy maintain their vibrancy throughout. Even with the play’s propensity for circular reasoning and some big questionable gaps, I’d recommend “Heroes of the Fourth Turning.”