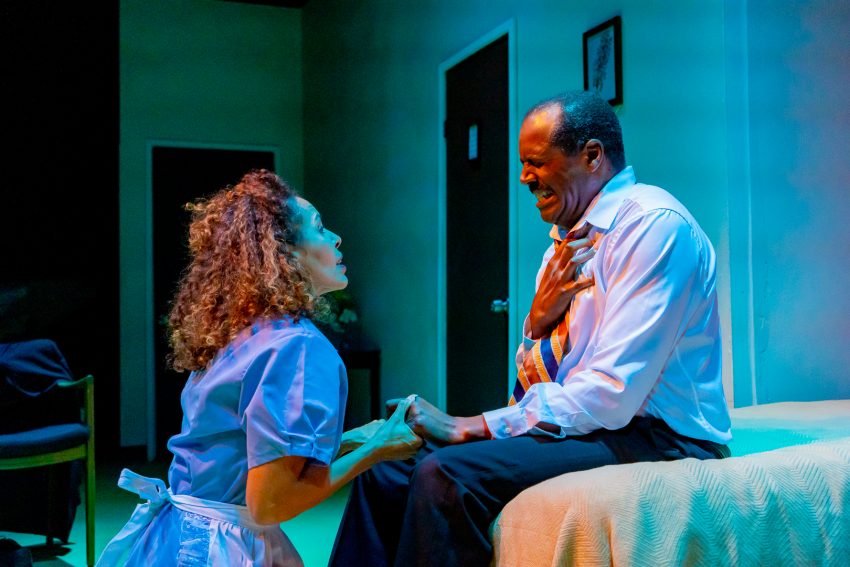 In “The Mountaintop,” playwright Katori Hall’s conversational dialogue makes us eager to hear more of the spirited interaction between two fully engaged actors: Fred Pitts and Damaris Divito. Director Sinjin Jones does a wonderful job opening their connection into a multifaceted tragicomedy.

After an exhausting week protesting for Memphis sanitation workers, King (dynamic Fred Pitts) returns to his room at the Lorraine Motel on April 3, 1968. Frustrated and short tempered, King checks for microphones because he is being watched. He jumps at every lightning strike as if he were being shot, putting us on the alert, too.

When motel maid Camae (vivacious Damaris Divito) enters, we immediately sense the strong chemistry between them. Awed by his reputation, Camae assumes a mothering, caring demeanor toward King—while he is affected by her looks.

Camae demurs when King remarks twice on her beauty, saying, “That’s the third time you told me I was good looking.”

King replies, “I only said it twice.”

Camae responds, “The third time was with your eyes.”

Katori Hall takes chances, toying with King’s revered reputation. She touches on his alleged infidelities frankly, but with humor and playfulness. Her risky approach pays off with laughs and insights.

As their banter continues, they switch from frivolous to serious. Camae tries on King’s shoes and suit jacket, jumping onto the bed and delivering a sermon laced with profanity. As King, Pitts is delightfully confounded by her earthiness, as he wavers between attraction and shock at her blasphemies.

Lighting Designer Brittany Mellerson does a superior job, starting with a sepia tone that gives the motel room its 60s ambience. She makes great use of color and light flashes for the persistent storm.

As MLK, Fred Pitts embodies honesty and dignity— mingled with human frailty. Pitts’ MLK is aware of his importance to the Civil Rights Movement, but he longs for the simple life of a minister.  His flirty interaction with Camae lightens the mood, as he remains oblivious to his impending doom. We find ourselves fully sympathizing with King’s dilemma on the night before his assassination on the balcony of the Lorraine Motel.

I find myself admiring both characters. They are not intrinsically flawed, although some might criticize their actions.  King is cheating, at least in intent, but Pitts retains an innocence in his flirtation that we comprehend.

Slowly, King realizes that Camae knows his secrets.  She calls him by his baptismal name, Michael, as he suffers a panic attack following a lightning strike. Camae refers to God as female and Black as well, making King ask if she is an angel.

The play takes a philosophical turn as King quizzes Camae about the nature of God and of dying. He convinces her to phone God and ask for more time because his work here is not yet done.

King argues that he does not deserve adulation, since he is not perfect. Camae replies, “You ain’t perfect, but then you are.” She explains that one person cannot reach the mountaintop alone, so King must pass the baton.

The Pear Theatre’s new lobby features a snappy, modern design, while the theater, itself, is compact, with good lighting and sound. New risers create an intimate feeling for the audience, perfect for King’s personal struggle. Go and enjoy an inspiring production with top-notch acting that’s well worth a trip to “The Mountaintop.”

“The Mountaintop” by Katori Hall, directed by Sinjin Jones, at The Pear Theatre, Mountain View, California.  Info: ThePear.org – to February 19, 2022.