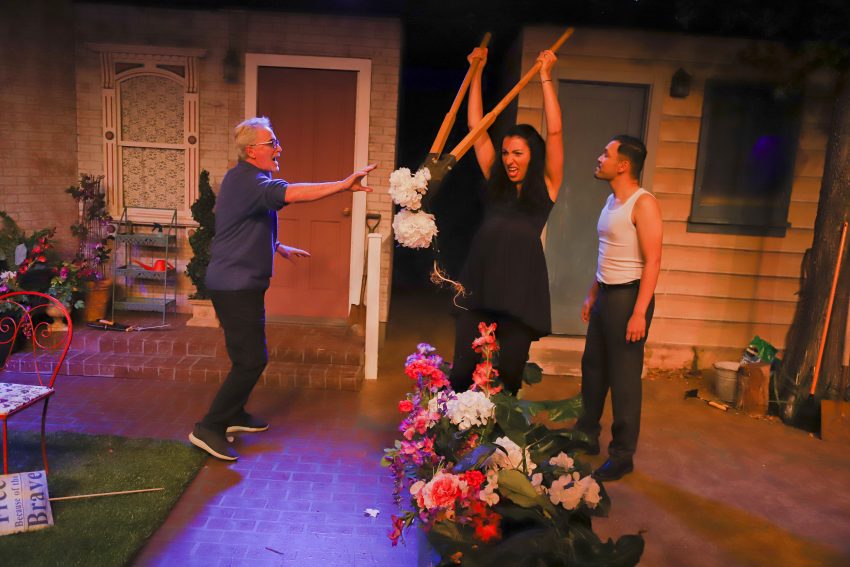 “Native Gardens” offers a 90 minute romp through the culture war battlefield, featuring some of the best local actors and reminding us that interracial sitcoms are a tradition on American TV. If you liked the confrontations in “All in the Family” and “The Jeffersons,” then “Native Gardens” will please you.

We know we are in sitcom territory because a young couple has just found a “fixer upper” in D.C., in elegant Georgetown—truly impossible! Ambitious young attorney Pablo Del Valle (tentative Justin P. Lopez) and his studious, pregnant wife Tania (lively Livia Gomes Demarchi) have just moved into their new home. Of course they are Latins in a white upscale D.C. neighborhood.

The Del Valles are planning a garden exclusively of “native” plants because Tania is a PhD candidate in plant geography, and her focus is on indigenous plants. Eager Pablo, seeking to impress his colleagues, invites the entire firm to a garden party in just one week!

Predictably, Tania is horrified: the backyard looks like Dogpatch, Pablo works 14-hour days, and she is very pregnant. We can see that they are smart, but also young and impractical. Frankly, it makes me wonder how sharp a lawyer Pablo might be.

When Pablo discovers that Frank’s  garden is encroaching on a slice of  his property, to the tune of $40,000,  chaos ensues. The hopeful amity between the new neighbors quickly devolves into multiple crises.

Tania is just as passionate about native plants as Frank is devoted to competitive gardening, his anxious handle on reality. Frank fears that, if he loses his garden, he’ll be losing a lot more.

As Tania, Demarchi soars with a charismatic presence and wide vocal range. In an intense argument, she lashes out at Virginia in Spanish. Though I don’t speak Spanish, I could tell precisely what she means. Like Shakespeare or Rock ‘n Roll, the words may be foreign, but the sound speaks volumes.

Playwright Karen Zacarías uses consecutive blackouts to frame the story. But the blackouts and scene changes slow down the action considerably. The gardeners (convincing Sky Hernandez-Simard and Pablo Lopez) step in as stagehands who prepare the gardens for each change.

No spoilers here: I won’t reveal the dramatic revelation that finally resolves the garden dispute, and opening a path to  reconciliation between Boomers and Millennials. “Native Gardens” fulfills our desire to laugh at old disputes in new gardens.