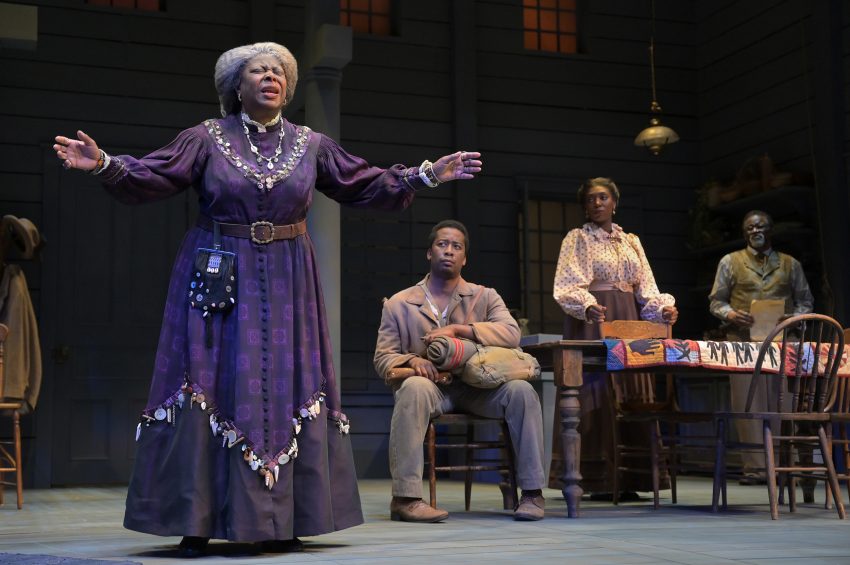 In “Gem of the Ocean,” Aunt Ester (superb Greta Oglesby), a 285-year-old seer and healer, connects us to our history because Black history is American history. We must study it because our country was not founded on slaves but on enslaved Africans. We teach about slaves in our schools, but we refuse to humanize them.

August Wilson’s play humanizes the history of Africans who built America. Director Tim Bond transforms August Wilson’s invocation of a slave journey into a healing sanctuary. Brilliant staging, design, direction, and acting make this a proud production for the Bay Area—not to miss.

Ester agrees to help fugitive Alabaman Citizen Barlow (endearing Edward Ewell), and to take him on a healing journey. With flair and gusto, Ester conjures a séance, taking Barlow on a voyage to the “City of Bones,” the home of millions of Africans who were thrown off ships or jumped to their deaths in the ocean.

Starting with a paper model of the slave ship “Gem of the Ocean,” Esther puts young Barlow into a trance to visit the lost spirits. Ester is a source of lost knowledge of the African past.

We are fortunate enough to be part of a spiritual awakening within the African American culture and community. “Gem of the Ocean” performs a powerful ritual for African Americans to reconnect with their ancestry.

Ester cleanses his soul and makes him whole. Now he is ready to stand up for his people. The scene is moving and tells us what we didn’t know about the origins of the USA—about the beginning of slavery. It’s a startling and dramatic vision, as master magician August Wilson hurtles us back in time.

Aunt Ester, the dominating force in this spiritual hymn, evokes the spirits of Africans who were dragged across the ocean to the U.S. Director Bond paints a vision of a brave, resilient, and creative people.

Greta Oglesby embodies all the traits of a wise woman, a shaman, and a truth teller. What a magnificent evocation to take us on a journey of enlightenment—a landmark production of an American masterpiece. Be sure to get on board!