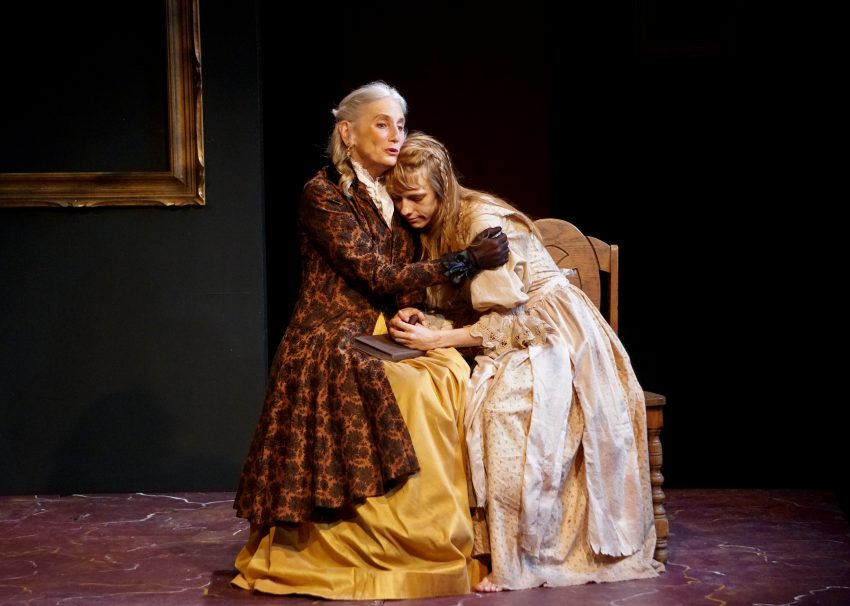 Naomi Wallace Laughs through Apocalypse, Then and Now

In the 17th Century, humankind found a way to capture, bottle, and sell goat and human flatulence to ward off the plague. In the 21st Century, when word of the pandemic broke out, the first impulse was to hoard toilet paper. Make of that what you will.

The team at Main Stage West deserves much credit for mounting this prophetic twenty-five year old play. I was pleasantly surprised that this production of “One Flea Spare” by Naomi Wallace focuses on the characters and their relationships during the London Plague of 1666 rather than on political issues.  Of course, plenty of social injustices are exposed by the Plague as well as by our own pandemic revelations.

It made me think the unthinkable: How the simple fear of an impending apocalypse can drive people to feats of unimaginable irrationality.

At the height of the Plague of 1666, London wealthy businessman Mr. Snelgrave and his wife (John Craven and Elly Lichenstein) complete their 28 day lockdown, and hurriedly pack to leave for their country home. When Kabe, the local Watchman (affable, exuberant Kevin Bordi) discovers that two interlopers have found their way into the townhouse, the Snelgraves and their “guests” are forced into starting a terrible new lockdown, together.

Wearing a beautiful, intricately brocaded red gown that foretells her fate, Lichenstein nails the carriage and attitude of the aristocratic Mrs. Snelgrave She plays Mrs. Snelgrave’s  growing awareness of her husband’s manipulations with a combination of vulnerability and wit, making her sad fate heartwrenching.

As Mr. Snelgrave, John Craven, is appropriately disgusting and ridiculous. He understands that circumstances have opened up the opportunity to question his sexuaity. In his homoerotic attempt to seduce a sailor, he leers and practically drools.

A young peasant girl, Morse, (Miranda Jane Williams) sneaks in at the same time as Bunce, claiming an aristocratic lineage. As Morse, Williams turns in a moving performance in a significant role. What an accomplishment for this young actor! Only she survives to escape.  It’s ambiguous whether young Morse is headed for disaster or if she is the hope of the world.

Main Stage West has made me a fan with their bold choices and smooth production.

But the next time I see someone hoarding toilet paper, I’ll think of this play—and the apocalypse.