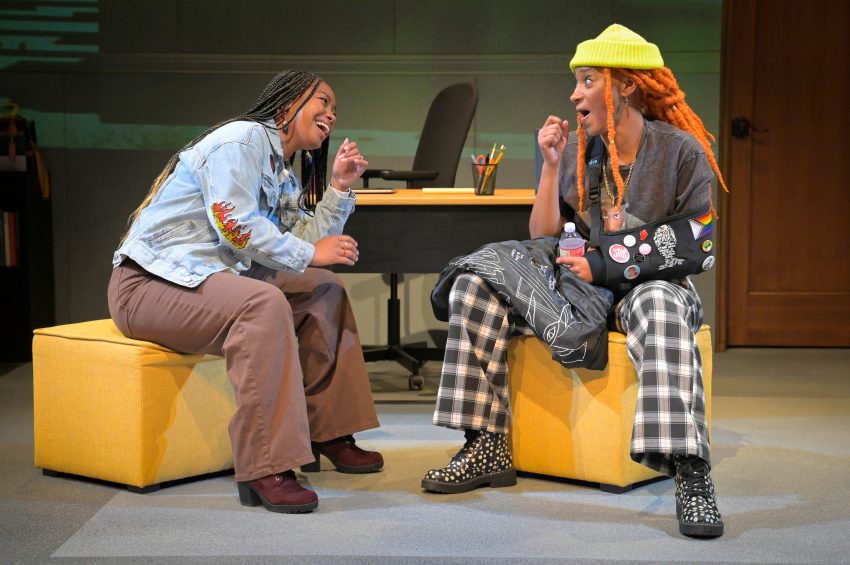 Cleavon Smith Debates the Ways and Means of Racial Progress

Students rally frequently at UC Berkeley’s Sproul Plaza. During protests, University Police are often called to seal off buildings and to “protect” people and property. All too often police clash with impassioned students in predictable outcomes.

Playwright Cleavon Smith wisely chooses a Cal protest as backdrop for his new play, “The Incrementalist.” Aurora Theatre Company in downtown Berkeley is the perfect company for his clever play—its intimate arena stage puts us close to the actors.

“The Incrementalist” is a bounty of challenging ideas, interesting perspectives, and an inspired display of raw, human emotions. The gifted actors beautifully deliver an instinctive script. We sympathize with each character, yet each has a radically different path forward. The dialogue is brilliantly thick with intellectual concepts and policy disputes.

Director Dawn Monique Williams rightly sets the scene minimally—protests and landmarks in Berkeley appear on a screen, yet we are left mostly alone with just the actors.

The play involves four characters deeply connected to a tragic event: UC Berkeley’s response to an incident of police violence against a Black student. The characters have similar values, but each has radically different ideas on what is to be done. When the university offers a “dialogue” between the administration and the Black Student Union, viewpoints collide.

The wounded student Raz (electric Sam Jackson) is critically, and perhaps permanently injured. As chair of the Black Student Union, (who uses pronouns they/them) they see their injury as leverage to demand change.

Her lover and BSU consort Miriam (passionate Anna Marie Sharpe) will settle for money and less radical change. But Raz wants the university to declare itself an historically racist institution, while Miriam seeks peace through collaboration.

Raz and Miriam’s debate is poignant yet tender. Their love sparks while arguing, playing, teasing, and fighting. It is breathtaking to watch these two talented actors depict an intense love affair.

The university is represented by the embattled Vice Chair of Ethnic Studies, Nina (exacting Cathleen Riddley). Riddley perfectly embodies an administration wonk with her own history as a woman of color.

Nina has fought her way up the academic totem pole and sees the Chancellorship in her sights if she solves this issue. She sees Raz’s entitled outrage as enemy of the good and possible.

Nina brings on Thomas, (fatherly Michael J. Asberry) to facilitate the campus dialog. A cardigan-wearing nice guy, Thomas plays intellectual hard ball disguised as an empathetic teddy bear. He rattles off poignant insights such as “just because you don’t like the sound of it doesn’t mean that what someone’s trying to tell you wrong.”

Each character has a righteous point: Raz wants to “burn it all down;” Miriam wants to utilize the settlement money to fund real change.

Nina wants a win to continue her life’s crusade to get minorities into power positions, and Thomas wants a solution that makes sense. Can all parties be satisfied with small incremental steps? Is the BSU selling out? Smith forces us to think about what is right.