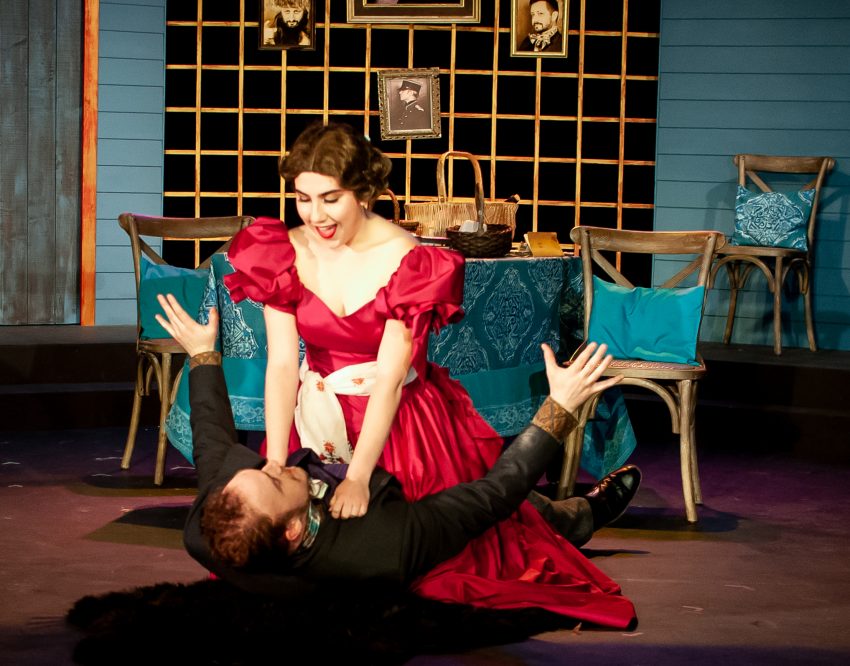 In a Russian town, a panicked Mayor (versatile Steve Price) finds out from a letter that a Government Inspector will arrive “incognito.” The undercover Inspector will audit how they spent state funds for buildings and services. However, he may have already arrived!

Mayhem ensues with the Mayor’s officials: The Judge, The Hospital Director, and The Educator scurry around the office with exaggerated gestures and excuses. They spontaneously incriminate themselves, confessing to their long-standing bribery—without even being accused. We laugh at their foolish self-deception and rationalizations.

The quick-witted Judge (articulate Philip Goleman) boldly asserts: “I tell everyone plainly that I take bribes, but what kind of bribes? Why, greyhound puppies. That’s a totally different matter.”

When the Mayor asks the complaisant Hospital Director (Christopher Harney) to equip patients with clean nightcaps and remove their strong tobacco, he responds, “If a patient is going to die, he will die anyway.”

I love the different types of humor and speed of delivery.

Hlestakov, depressed and penniless, is suddenly inundated with spontaneous and gratuitous bribes without exerting any effort. Harris portrays the grifter with charm and finesse.

Jeffrey Hatcher’s adaptation turns the tables on the bourgeoisie by showing a poverty-stricken worker about to kill himself because he cannot survive. Hatcher underlines the harrowing, modern contrast between grifters and homeless that we see around us.

Hlestekov’s sidekick, snarky Osip (sardonic Wood Lockhart), chides him at every turn; but he affirms his boss’s legitimacy. Osip rattles off dry quips like an aged court jester.

Although the brilliant comedy tells us that the Inspector may never appear, we can soon detect the culprit.

You’ll enjoy “The Government Inspector.” See it and have some fun!