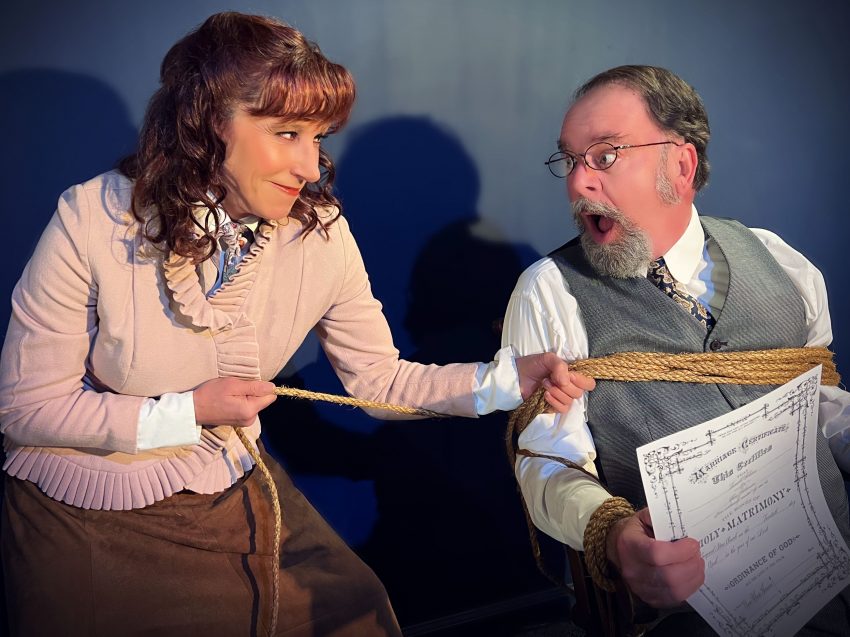 In 1879, Ibsen’s Nora Helmer escaped the suffocating “doll’s house” with all its restrictions, where she was often treated like a child. She left behind Torvald, her condescending husband; Anne Marie, her faithful nanny; and her children.

She owed it to herself to be free.

Now, fifteen years later, modern Nora (fast talking Alison Peltz) has become a novelist who writes expressly for women, nudging them to peel free from their spouses.  Now a world acclaimed feminist, Nora grapples with laws and customs that oppress women, turning them toward change.

One disgruntled judge discovers that she was not legally divorced, so she is still bound to the old laws—and Torvald. Nora fears being called a hypocrite. And she could face criminal charges and lose her fortune. Because she desperately needs a divorce, Nora is forced to knock on Torvald’s door.

Back at the doll house, she faces heart-broken, stoic Torvald (dynamic Mark Clark); faithful Anne Marie (probing Shirley Nilsen Hall); and her coy daughter Emmy (smooth talking Jannely Calmel). Anne Marie questions Nora’s loyalty, and Emmy avows the sanctity of marriage. Since Torvald “allowed them to feel that she had died,” her daughter would like to see Nora leave again.

As a liberated woman, Nora reinvents herself. Lucas Hnath’s daring portrait of a woman who abandons her family asks: What do we owe our families, our jobs, and our partners? What price do we pay for loyalty?

As Nora, Peltz creates intensity by pacing like an anxious bird in a small cage. We feel the effect of the “doll’s house” on her again.

Anne Marie, who raised Nora’s children, accuses Nora of disloyalty. Because Nora shows little guilt, I wondered if she still believes that “The world is not going to change my life. I’ve got to do it myself.”

Nora and Torvald bicker incessantly over their relationship. The conformist and embarrassed husband fears exposure because he claimed that Nora had died.

Nora felt no loyalty to her husband or their marriage. Society held a stronger hand over personal issues than it does today. Nora says at one point, “I do believe in love, but love is different than marriage, a concept many people struggle with in modern times.

The most exciting part of the play is their vehement argument, which is real and organic, and yet funny, a pleasure to watch. They reach a place of raw honesty, a new level of communication.

Come see the delightful “A Doll’s House, Part 2.” It’s sure to spark lively conversations about women and marriage.