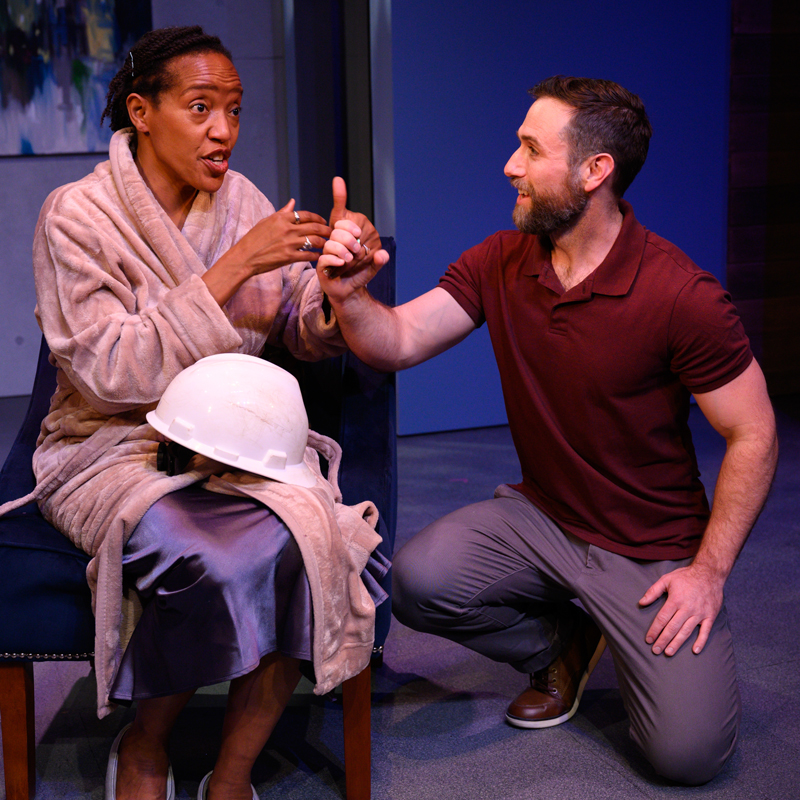 Adam Bock Provokes Us with a Proud Woman’s Fate

Covid has not struck the intimate suburban New York world depicted here. “A Small Fire” debuted in 2011. The strange malady that attacks construction company owner Emily Bridges (steely Desiree Rogers) strikes with pointed, fated cruelty and a touch of magic. Yet the peculiarities of her symptoms resonate in the closed horizons of our pandemic—at the perfect moment to revive Bock’s  play.

Emily Bridges is a woman of power. She expects compliance from her employees and hovers a twitchy finger on the firing trigger.

Her loyal foreman Billy (buoyant Nick Trengove) provides the crema to her jalapeno fire. He placates, he banters, he reminds her that workers are people with illnesses and families of their own. He draws out the gentler angels of her nature. Their lively rapport in Bock’s witty dialogue entertains us through the first, slowly smoldering scenes. We are waiting for a small fire to disturb their carefully constructed balance.

There is trust here and love. We believe in these characters.

Emily treats her family with tough love, too. She’s on the outs with her alienated daughter Jenny (assured Leigh Rondon-Davis). Emily gives thumbs down to Jenny’s fiancé simply because he imports French cheeses. Emily’s resigned husband John (nuanced Dixon Phillips) pleads his daughter’s cause in vain.

Suddenly, in a pool of light, isolated from realist logic of the play, Rogers dances wildly. We wonder what her sharp, fractured movements portend. We are mesmerized by Emily in her reduced state.

As the plague unfolds, playwright Bock steadily deprives Rogers of her actor’s tools. But Rogers brilliantly communicates Emily’s inner turmoil. Her fingers worry the shell of a construction hardhat. She projects the blankest of stares. She gyrates and yells, alerting us that love and hope may still lurk.

Director Mary Ann Rodgers keeps the play tight at a crisp 90 minutes. We want to see more: the workers and the faceless fiancé Henry. We want hear about them, but their conflicts are absent.

In an ecstatic set piece from a condo balcony, Billy drags John to share his passion for racing pigeons. Following Emily’s orders, Billy reveals the thrill of the race to John. It’s an hilarious comic scene that brings back pleasure and life.

They wait and they watch. Their hopes build and are dashed as a seagull soars past. Friends from Queens and Staten Island ring in pigeon sightings. They share the joy of human connection.

With the pigeons, Bock suggests some Greek augury at work here—the hand of the gods in Emily’s condition. Her fate is cruelly suited to a woman who values control above all. By striking at her core identity, “A Small Fire” offers a chance for healing.

Facing our own fragility, we feel dread, but hope too, that we may live to become our own best selves.

These fine actors bring us fully into their world. At the end, you could hear a pin drop in the theater. We are no longer watching a play but wondering what Emily’s fingers portend this time, dancing.