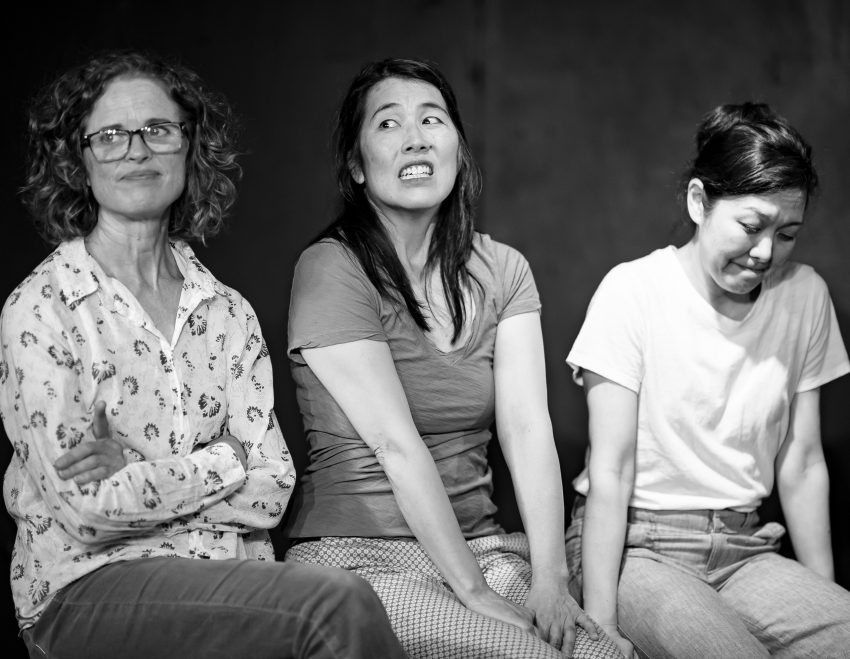 We take our seats opposite the minuscule, stark, black stage. The only set pieces are five black stools and two window frames hanging from a track. The actors move the frames to change scenes, a clever device from Set Designer Malcolm Rodgers.

The window frames immediately made me think of Magritte paintings and the way they could either reveal emptiness or amazing landscapes. Ben Davis plays brooding  cello, bringing the set to life with original improvisational music by cellist Ben Davis.

In an era of  navel gazing and self-indulgence, Sarah Ruhl’s  characters engage in a sincere melodrama. In “Melancholy Play,” they express their emotions openly. She makes clear that melancholy is not depression and delights us with her offbeat take on sadness.

Bank Teller Tilly (hilariously animated Shawn Oda) is sad; so she’s reluctantly seeing a psychiatrist, called Lorenzo “the Unfeeling” (Jason Berner speaking in an exaggerated Italian accent). The psychiatrist, exasperated by Tilly’s vagueness encourages her to continue with her medication.

But Tilly is so drenched in her sensual melancholy that everyone falls in love with her. She isn’t sad for any particular reason but when she casually mentions wanting to die and be reborn as a mushroom, she acknowledges the beauty and transience of life.

When Tilly goes to Frank the tailor to have her trousers shortened, Frank (serious Omar Osoria) also becomes enamored with her. Frank’s yearning for Tilly is requited, for now.

Lorenzo is enchanted by Tilly’s remoteness. He suggests she may have fallen in love with him: “It’s natural for people to fall in love with their psychiatrists.” Soon everyone falls  under Tilly’s spell: from hairdresser Frances (sultry Sakura Nakahara) to Joan (proper Eileen Fisher), a nurse and Frances’ partner.

When Tilly suddenly flips and declares herself “Happy,” her lovers get discombobulated. At this point I’m quietly smiling at the perversity.

With Tilly suddenly happy, Frances and Frank commiserate, wishing they could become a small object—so tiny it could fit your hand, like an almond.   Did I say this is an absurd play? A little Kafkaesque, in fact.

There is reason to the almond theme. Ruhl has referred to the amygdala, a portion of the brain involved with emotional response, named after the Greek word for “almond.” With this line of thinking, we could all be nuts if we just let ourselves go.

There are more nutty moments in the play.

Lorenzo and Frank grapple over a vial of Tilly’s tears, leaving us  aghast and laughing at the same time. They roll around on the floor, punching, kicking, getting sweaty to stirring fight music from the cello. Fight Director Kristin Matia must have told them to pull out the stops! This was laugh out loud funny.

Wait, there’s more. Go see for yourself and decide if you’re nuts about this play too.

I loved every minute of it!