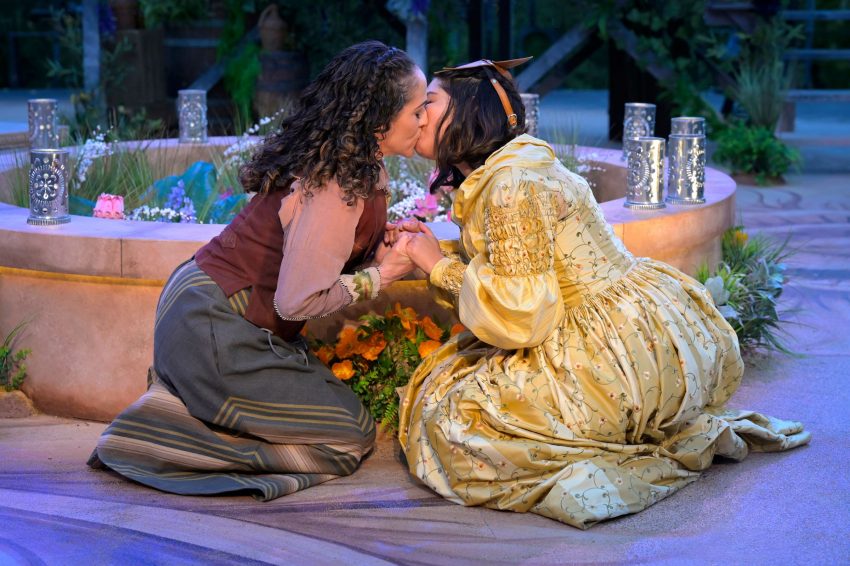 We’re immediately enraptured by the chemistry between Romeo and Juliet. Revelatory Sarita Ocón as lovestruck Romeo and delightful Gianna Digregorio Rivera as Juliet prove the power of love at first sight. As they are romancing at the Capulet fiesta, we are struck by the tenderness and daring of the two women lovers.

The adaption by Karen Zacarías magically weaves Spanish into Shakespeare’s dialogue, forging a new poetry with the lyrical Spanish rhythms.

In “Romeo y Juliet,” Spanish acts as the great equalizer. Shakespeare lovers are given a new appreciation for the play, while Spanish speakers will be newly drawn into Shakespeare’s poetry. And of course, anyone fluent in both Shakespearean language and Spanish are doubly blessed.

When the Prince (stately Juan Amador) demands a truce between the warring families, we recognize a more sinister purpose—the oppressive United States strains to keep the “peace” won by bloody war. Colonialism rears its ugly head when The Prince sharply dressed in U.S. military uniform, interrupts the opening brawl. He condescends to his new subjects in a thick Southern drawl.

None of this would be possible without the superb cast, who nimbly balance the Shakespearean text with the Spanish translations.

Ocón is in a class of her own, clearly having a ball playing Romeo as a swaggering, cocky woman, who instantly melts in the presence of her lover. Rivera charms with her delicate, spunky Juliet, who later takes charge of her fate.

In memorable performances, Orlando Arriaga delights as an easy-going Friar Lawrence, and enthralls as the volatile Lord Capulet. Alluring Eliana Lopez electrifies as the laser-focused Lady Capulet, stunning in a regal red dress. Hugo Carbajal excites as the firebrand Tybalt, while his kindly Paris displays a touch of American naivete.

Wilma Bonet cracks us up as the exasperated Nurse, evoking a stern but loving abuela, scolding the upstart young’uns in comedic Spanish tirades. Captivating Juan Amador adds mercurial hotheadedness to Mercutio’s jocular, romantic nature. When he confronts Tybalt’s saber with a pitchfork, he epitomizes the class struggle between native and invader.

As Benvolio, Brady Morales-Woolery lends an element of sage insight, stepping into the role of the Chorus, deftly delivering the ominous Prologue and Epilogue.

Zacarías and Sanchez have opened a new gateway into Shakespeare, where all are welcome. Cal Shakes astonishes with verve, life, and color. Don’t miss it.