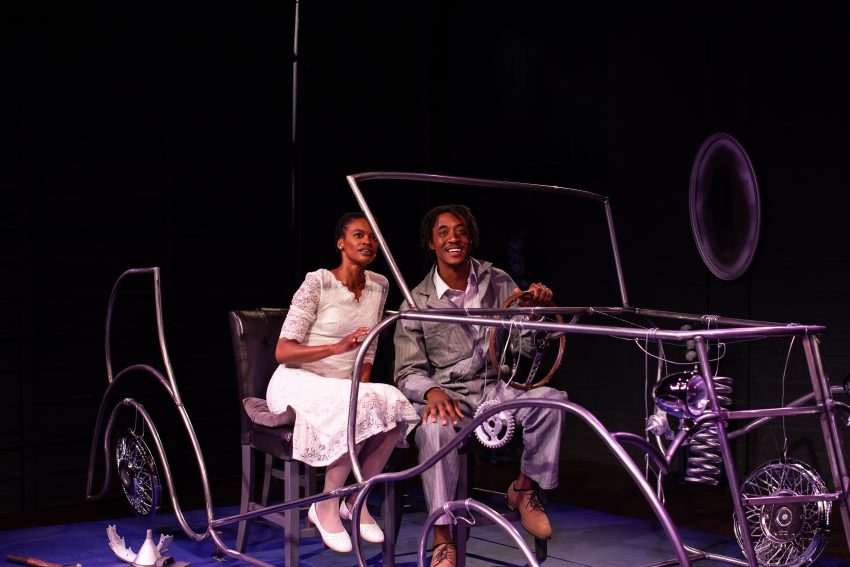 Aishah Rahman’s 1987 play “The Mojo and the Sayso” tells the story of a 1973 murder of a 10-year-old-boy in Queens, New York. The boy was shot in the back by a drunken plainclothes cop.

They charged the police officer, and then unanimously acquitted him, setting off a domino reaction in the community. The officer was later fired, but the impact on the family was catastrophic.

Rahman fast forwards us to three years later, just days after they receive a large check for their son’s “wrongful death.” Even years later, the family is still suffering as though their son and brother had just been murdered.

Awilda (phenomenal Paige Mayes), the suffering mother, has found her solace in the church. She relies on her money-hungry Pastor (flamboyant Reginald Wilkins) to seek a connection to her son. As Awilda, Mayes is superb. Her powerful singing voice is beautiful, a voice that holds us in awe, springing naturally from the poetic verse.

Her frustrated husband, Acts (dynamic Dane Troy) finds solace in building a magnificent automobile, his Mojo, that offers “freedom and understanding.” Acts dreams of driving his family toward a new beginning. As Acts, Troy helps propel the story forward, acting as a grounding force to the family. His final monologue, tears flowing with anguish, is a treasure.

Their older son, angry, resentful “Blood” (intense Stanley Hunt) cannot find peace. He faces the world with raging sadness, wielding a gun and knife in his family’s home. He says: “I see Linus’ blood on every street … the chalk lines.”  As Blood, Hunt portrays a lost son, aimless when not angry, longing for the family to recognize his need for them to reunite.

They wonder what to do with the blood money, the check for “wrongful death.” Awilda asks, “What is the life of a ten-year old boy worth?” The check precipitate the reoccurrence of the family crisis, yet again, after three years.

As a psychological piece, this is the perfect study of a family’s dysfunction as they are torn apart by grief. Can they mend? Acts is rendered nearly mad by his feelings of guilt. He and his son were running away. Could he have saved him?

Awilda wonders what really happened.  Did her husband abandon their son? Did he have a gun as the officer claimed? Can Awilda trust Acts to tell the truth? These questions tear a deeper hole in the thin fabric of their deteriorating marriage.

There are some terrific highlights in this 80-minute play as well as lulls and repetitions. Mayes singing voice and acting, and Act’s emotions are well worth appreciating.

Rahman focuses our attention on the fact that fifty years ago, a bullet ripped through a small boy’s body. That act is repeated over and over again, up to the Buffalo shootings and today.

“The Mojo and the Sayso” by Aishah Rahman, directed by Ayodele Nzinga, by Oakland Theater Project, at FLAX art & design, Oakland, California. Info: OaklandTheaterProject.org – to June 26, 2022.