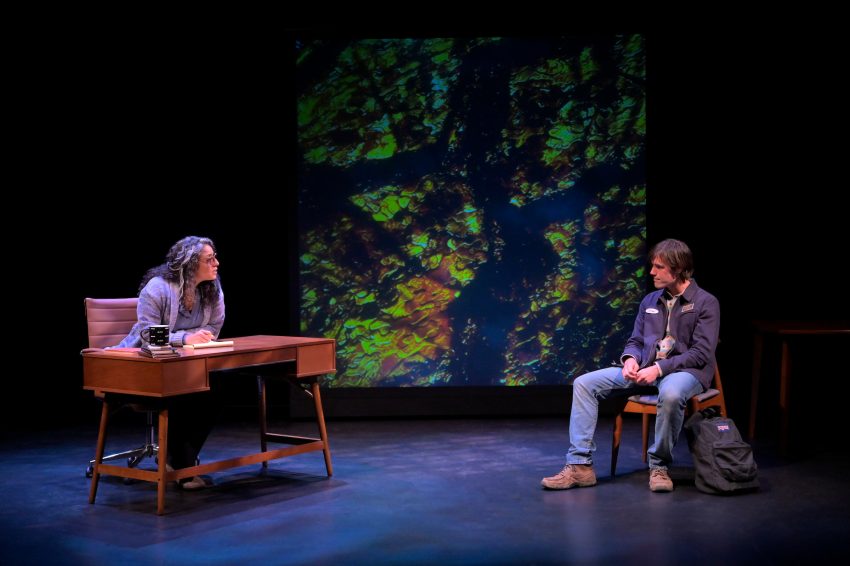 “The Sound Inside” is more like a case study than a play. When an isolated Creative Writing Professor at Yale encounters a troubled, arrogant, aspiring freshman, does their mutual literary admiration lead to enlightenment or disaster?

Adam Rapp’s play is about Despair. Despair for all the things we have not accomplished and never will. It’s also a mystery—is the young student going to commit a murder? He wants to write a “perfect” passage, like the one about a double murder in Doestoevsky’s Crime & Punishment. He shows some terrifying signs.

Denmo Ibraham strikingly plays Bella Lee Baird, privileged and proud of her achievements. She lives alone, avoiding intimacy in favor of the writing life. Based on a few short stories and “an under-appreciated novel she wrote 17 years ago,” she finds herself in a cushy post at Yale.

Now at 53, she faces loneliness and worse yet, becoming a minor writer. Adam Rapp calls on us to sympathize with the melancholy professor who is facing a severe illness.

When her freshman student Christopher Dunn (mysterious Tyler Miclean) appears—without the required appointment—at her cave-like office—he emerges as another isolated, self-congratulatory writer.  Only he embodies her traits to a disturbing and grandiose extreme.

When she finally receives praise from Christopher, she swallows it like a hungry fish. They become intertwined in odd ways. However, it’s hard to believe that any freshmen Yalie would behave so rudely with a teacher. Or, that a teacher would fall for it.

Their “superior” individualism has kept them disconnected from others.  Christopher has no obvious relations either but plenty of stories about himself and his impulse to reject people. He doesn’t do email or hang out with other students.

They read from their works in progress, while chalky text unfurls on the shadowy wall behind. The writers seem to be psychological works in progress, themselves. Could this spring from her fertile imagination? It’s a thriller to be untangled. And danger lurks.

Is Christopher’s mere touch on the cheek of his teacher, the perfect moment, enough to sustain these two fragile creatures?

Bella used her own name in her novel to increase reader interest—a bold literary move. Christopher does the same in his scary novel.

As she talks directly to us in the first of many monologues and reflections, we feel her isolation and her sensitivity to slights. We get flashes of her writing on the dark wall behind her bare office setting. They are beautiful, but fade quickly before we can absorb them. That’s the way with Bella Baird, too—she latches onto a sentence, speaks in literary poetic paragraphs—but then she fades, falls prey to her own doubts.

Rapp’s dark, psychological story of two alienated psyches yearning to bond makes a kind of thriller, if you buy in. Or maybe it’s all Bella’s fertile, fervid dream—her long-awaited masterpiece. It’s a puzzle that raises doubts, even as she struggles for life.