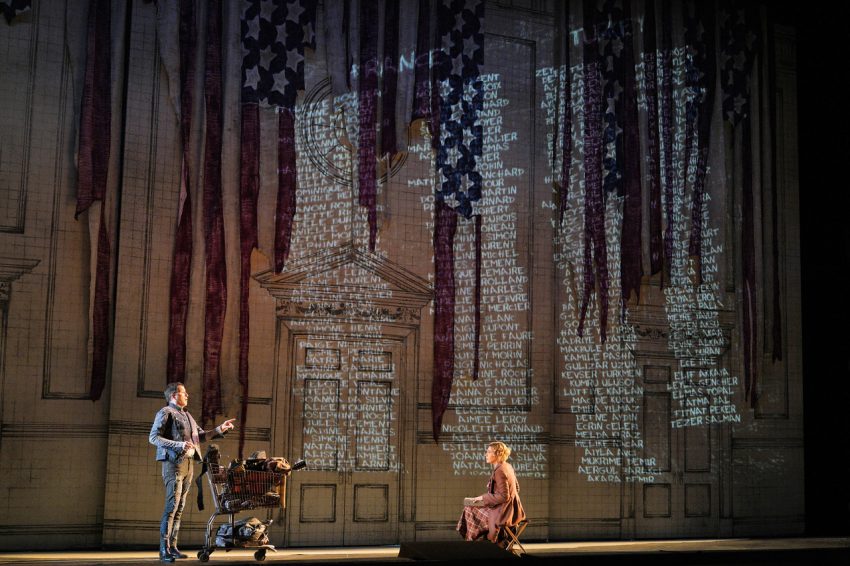 Mozart’s Don Giovanni is nonpareil—a masterpiece with an amazing score, jam packed with beautiful arias, duets, and recitatives, and a creepy cautionary tale to keep your morals in check.

When Mozart was at his creative height, he collaborated with poet Lorenzo Da Ponte on three operas, and Director Michael Cavanagh tops off his multi-year trilogy with this new production of Don Giovanni. Cavanagh reimagines the operas, setting them to three American historical eras—all in the same house over 300 years. This innovative concept brings interesting relevance as current events force us to face the fragility of the American Experiment.

In Cavanagh’s Don Giovanni, we see a dystopian future where the American house and society are crumbling. Greed, desire, and hunger for power rule the day without regard for fellow humans. The concept is spot on, but I find the execution a bit confusing.

The setting is odd and ambiguous—the same American house is draped haphazardly with tattered American flags. Symbolic of decay, but the use of the house in this production seems like an afterthought.

Confusion sets in as characters seem to represent multiple eras in all styles of dress. I realize the creative team (set designer Erhard Rom, costume designer Constance Hoffman, and lighting designer Jan Cox) attempt to create a sense of timelessness and decadence, but I found it all more perplexing than effective.

After adjusting to the disorientation, I settle back to a fabulous night of music led by Parisian Conductor Bertrand de Billy in his SF Opera debut. De Billy leads the formidable orchestra along with an extraordinary international cast of top-notch talents. From this point, Don Giovanni does not disappoint.

Don Giovanni is a nobleman—at best a womanizer and user, at worst a rapist and murderer. He insists women and wine justify his never-ending conquests. Only self-indulgence matters to him. In Giovanni’s world, his ends justify all means. He is a monster.

We experience Giovanni’s art of seduction and psychoses in the beautiful love duet “La ci darem la mano.” Baritone Etienne Dupuis enchants with a voice that is both powerful and seductive. He woos the peasant girl Zerlina (deeply talented Christina Gansch) who gives the role a strangely unique twist.

There are several amazing arias and lead performers in this opera—too many to highlight. Don Giovanni’s servant Leporello (awe-inspiring bass-baritone Luca Pisaroni) and his master wander the streets dressed like 1980s British punk rocker thugs pushing an overflowing grocery cart and making trouble.

As Leporello questions Giovanni’s hedonism, he sings the famous aria “Madamino, il catalogo è questo,” a listing of all Giovanni’s conquests by country. As Leporello, Pisaroni is charming with a remarkable stage presence. Samoan-born tenor Amitai Pati as Don Ottavio also stands out with his golden aria “Dalla sua pace.”

Despite some hiccups, SF Opera and Director Cavanagh deliver a Don Giovanni well worth seeing. Mozart’s score along with SF Opera’s orchestra, singers, and chorus make for a fabulous night of music. The crown jewel of the libretto gives Don Giovanni his just desserts in a flaming trip to hell. Karmic payback and eternal damnation are icing on the cake.