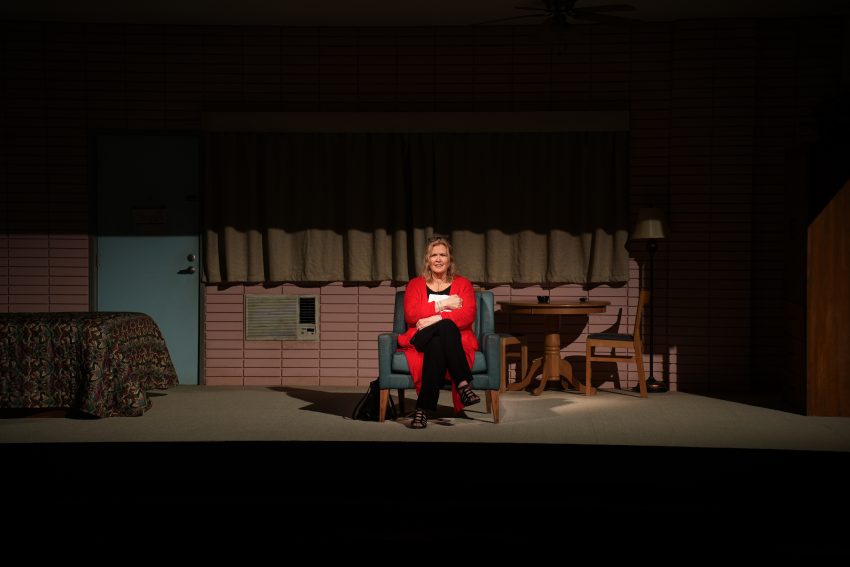 “Dana H.” tells us about a secret connection between extreme racist criminals and police co-conspirators. No wonder they only arrest demonstators at #BLM rallies and turn their heads when the Aryan Brotherhood brings AR-15s to peaceful protests.

Even in a bubble of privilege, can anyone be safe in such a country? “Dana H.” tells us that in the good old USA, especially in Florida and North Carolina, anything can happen to you at any time. Here a woman is kidnapped from her own house and held prisoner and tortured for five months, and even has to hide out afterwards to protect her family.

“Dana H” is a tape recording of playwright Lucas Hnath’s mother, Dana Higginbotham, telling the story of her abduction by a crazed and murderous member of the Aryan Brotherhood. Hnath has brilliantly edited his mother’s interview tapes down to 75 gripping minutes. In her own voice, Dana H. tells the story of her kidnapping, interviewed by Steve Cosson. But she is telling her own story.

Dana H. is played by the marvelous Jordan Baker who lip syncs to Dana’s words, listening to the tapes in her ear buds. Baker cannot hear the audience; and we hear only Dana H’s voice, a Herculean feat which Baker pulls off with touching grace.

As a Christian Evangelist counselor, Hnath’s mother helped serious prison offenders. But one night, a former patient named Jim propelled himself through a high window in her bathroom. Covered in glass and blood, he took her away to a cheap motel.

He hides her, often in plain sight, for over five months in a series of shabby motel rooms which set designer Andrew Boyce sums up in one wonderfully washed-out beige toned motel room. Baker sits for most of the play, subtly acting out Dana’s actual words. It’s a chilling and subtle performance, that brings nuances to her character. We feel like we know her.

It turns out that in cases like these, the police are no help. Dana H.’s tale exposes the fact that we live in a state of murder.

Even when Dana H. manages to break away from her abductor and runs to police, they side with the criminal. No one dares confront the brawny, tattooed prison veteran who has some hold over the police. Whenever she manages to run to an officer, they end up with an arm around the notorious convict’s shoulder. She proves that we live in a country where the police protect criminals and terrorists.

Her abductor, Jim, is a deep dyed criminal who has been killing people for profit and pleasure since he was an abused and rejected child. He’s a known prison leader who has power all over the country, even over police. He spent most of his life in prison, on meth, and running criminal conspiracies inside prison and out. He speaks the same language as the police, and they fear his allies, who kill at will.

What does this tell us? It tells us that there’s a network of conspiracy between the white supremacist gangs and the dubious police. Maybe there’s an insurrection waiting to burst out next door. To follow this thread, check the news, daily. And listen to Dana H. tell her stunning story at Berkeley Rep.

It’s a thrilling theatrical miracle that probes our country and our justice system down to the bone.