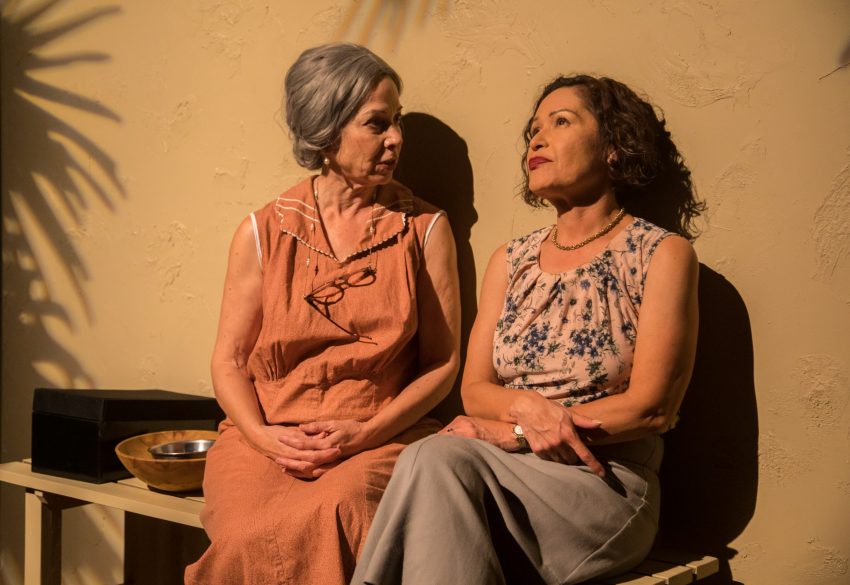 Cristina Garcia Condenses Her Celebrated Novel to Its Essence

This is a play of rebellion and revolution, a tale of the struggle between mothers and daughters. In Brooklyn, a Cuban immigrant’s daughter Pilar (vivacious Thea Rodgers) yearns to see her grandmother in Cuba, whom she hasn’t seen since she was two. They speak to each other through magical realism.

Garcia channels  her own experiences in “Dreaming in Cuban” and the  contentious family drama uses imagination and memory to take us to the seaside in Cuba and to Brooklyn. Three generations of women struggle to understand their family connections, while maintaining their independence.

You can take the girl out of Cuba but you can’t take Cuba out of the girl. In her Brooklyn bakery, Pilar’s mother Lourdes Puente (mercurial Anna Maria Luera) tries with all her might to leave Cuba behind and become American. She calls her shop “Yankee Doodle Bakery”!

For Grandmother Celia del Pino (compelling Mary Ann Rodgers), the past is ever present. Celia still sees herself as a revolutionary following Fidel. She still sits on a bench by the beach watching with binoculars for Americanos about to invade Cuba.

Her daughter Lourdes yearned to leave this crazy communist island to become American. Her sister, mentally delicate Felicia (Natalia Delgado), wanted to flee too. Felicia struggles to maintain her hold on reality and be a good mother to her son Ivanito (versatile Eric Esquivel-Gutierrez), who is attached to his abuela Celia.

The rising tension here is palpable. When Celia tells Felicia, “I saw your father in a vision—from the beyond,” Felicia responds, “Why did he come to you and not to me?” Felicia clearly feels left out.

Granddaughter Pilar dreams that seeing her abuela will make her feel loved. The only thing keeping her at home is her new love, bakery-worker Max (charmer Esquivel-Gutierrez). The chemistry between them is both flirty and wholesome. Max encourages Pilar’s efforts as an artist and tells her that his dad is fierce like Pilar’s mom.

In the intimate theater, actors pace the edges, drawing us into their drama. When Lourdes acts as a tough auxiliary police officer in thick-soled black shoes and fitted uniform, she pokes and hits the air with her night stick.  Lourdes is taking revenge on soldiers who attacked her when she was still in Cuba.

The best moments crackle with verbal sparring between the women, as they argue about Ivanito‘s care now that his mother has died. Lourdes indignantly asks, “Who’s the mother here?” and Celia emphatically declares, “I am!” The audience collectively laughs, “Aha!”

Gary Graves gracefully changes locations with lighting design. Projected palms, waves, and snowflakes tell us where we are. Gregory Scharpen’s sound effects—from the music to airport sounds— make us sway or jump at the sound of the airplane.

Whether you are arguing politics with your relatives or dealing with family feuds, this play hits close to home.

“Dreaming in Cuban” by Cristina Garcia (based on her novel Dreaming in Cuban), directed by Gary Graves, at Central Works, Berkeley. Info: CentralWorks.org – to July 24, 2022.