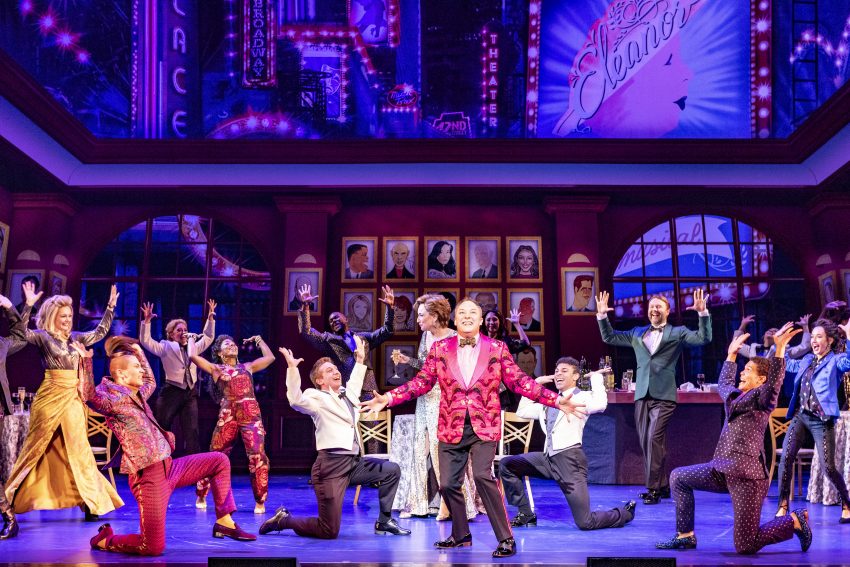 “The Prom” opened the week Roe v. Wade was overturned, and I passed multiple protests on the way. As I watched “The Prom,” a colorful fantasy land where kids wear backwards hats and a lifetime of homophobia can be overcome in a single song, I was torn between appreciating the technical splendor, and feeling miffed at half-baked attempts at morality.

Based on a 2010, a Mississippi news story told about a girl in a small town who wanted to bring her girlfriend to the prom. “The Prom” gives us a Broadway musical about timid Emma (Kaden Kearney), a lesbian in Indiana, who wants to bring Alyssa (Kalyn West) to the festivities. Emma’s wish incites the PTA to cancel their prom, entirely!

Enter four failing Broadway actors, looking for a trendy issue. When the New York actors arrive in Indiana to support Emma’s cause, their big egos overwhelm the small, Midwestern town.  As the sparks fly, we’re enraptured by the Broadway vs. Indiana, big city vs. small town clash.

Broadway Star Dee Dee Allen (Courtney Balan) walks, sings, and talks glamorously, even after her show, a musical about Eleanor Roosevelt, closes on opening night.  When she romances Principal Hawkins (Sinclair Mitchell), things go crash.  Despite Dee Dee’s half-baked attempt at redemption, she stays as selfish as ever.

Exuberant performer Barry Glickman (delightful Patrick Wetzel) wears garish suits, and sometimes a dress, embodying a flamboyant, gay stereotype. His journey of healing is upbeat, as he faces down his past rejections as a gay man.

Barry’s egotism gives way to our empathy, as we hear his coming out story. Becoming Emma’s “date,” he overcomes homophobia, as Wetzel sings the beautiful ballad “Barry is Going to Prom.”  Barry dances in Emma’s room, connecting himself to lost teenage joy.

Trent Oliver (talented Bud Weber) has little beyond a large smile, an empty head, and drawers full of Juilliard merch. As Trent, Weber embodies the show’s hollowness in “Love Thy Neighbor.”

In a cringe-worthy attempt to appeal to local teens, Trent sings about the Bible, citing tattoos and divorced parents, showing religious inconsistency.

More socially adept Angie (Emily Borromeo) enchants with a gorgeous voice as she complains about being stuck as a chorus girl.  Blinded by ambition, she leads the charge to Indiana.  She helps Emma in the seductive number “Zass,” showing the teen how to turn her nervous shakes into jazz hands.

Kaden Kearney’s Emma finds herself, inspired by being just a step away from Broadway stars. Although she’s a small, anxious girl buried in baggy clothes, the New Yorkers help her find her identity amidst rejection. Emma’s shining moment comes when she brandishes her voice in the touching song “Unruly Heart.”

“The Prom” inspires a lot of joy, without digging deep.  The more time passes, and the more the spectacle of the colors, dancing, and singing fade, I’m left wondering. Although the actors do find a cause beyond themselves, they are hardly as brave and active as the marchers in the streets, today.