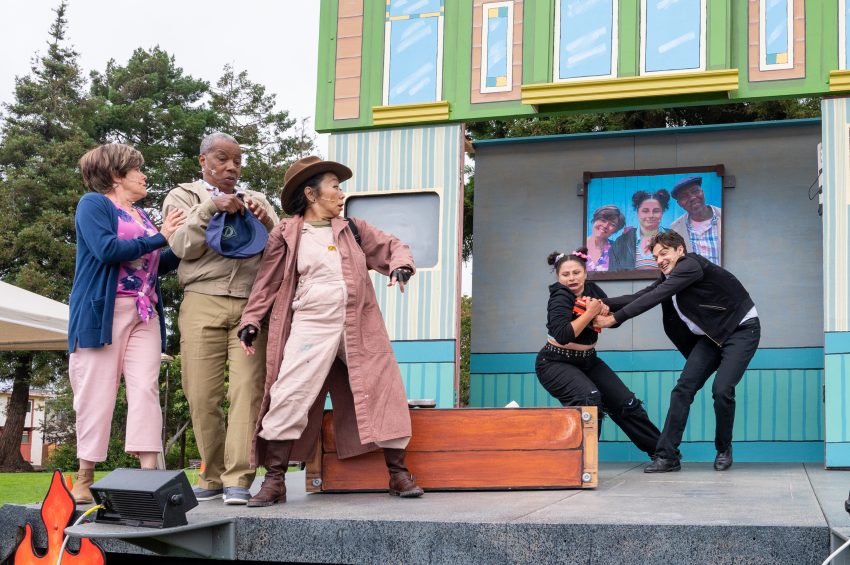 All summer, you can go to Bay Area parks to see the S.F. Mime Troupe’s latest comedy musical called “Back to the Way Things Were.” They fill the parks with color and life, jokes and music—letting us know exactly who is controlling America, now.

In their 63rd season, the legendary Mime Troupe offers the best political satire plus songs. Their motto remains: “Outspoken—Never Silent!” The Mime Troupe’s comedy reflects our miserable reality. They hit it out of the park with their powerful progressive comedy.

In Michael Gene Sullivan and Marie Cartier’s new musical, there’s a wild-eyed, trench-coated visitor from the future, called Book (Keiko Shimosato Carreiro). Book tries to convince innocent Zoe (Alicia M.P. Nelson) that she’s more than just an intern in the Housing Center, that she has the power to change the onrushing future.

Will Zoe bring her overworked parents Ralph and Alice (hilarious Norman Gee and Lizzie Calogero) into a new way of life? When Ralph and Alice sing about “The Way Things Were,” we realize that things never were that good—that things must get a lot better!

Zoe discovers that when everyone believes their efforts don’t matter, the greedy can just continue polluting the Earth.

The funniest action unfolds at the S.F. Housing Center, where lovable Norman Gee plays homeless Herbert. Herbert is waiting for Zoe and Ms. Olivia to find a place for him to live before the 5:00 PM deadline on his housing voucher. But neither Zoe nor Ms. Olivia can locate his paperwork in a HUGE pile of documents.

The Housing Center is pitifully feeble. Like most city agencies, they are underfunded and swamped with poor clients. So, they fire the good people and, typically, take the most capitalist solution: they choose PPP: public private partnership.

Andre Amarotico does a fabulous job as the malignant millionaire who turns everything into private profit. He’s hilarious as the cutthroat capitalist who does not care at all about the homeless or environment. When Amarotico and the band play “Cooked Alive,” they are singing about us on the planet.

The comic scene at the local “McBurger” makes it clear that fast food is destroying the Amazon to make us burgers. If we don’t do something about climate change, we will all be cooked alive. We will end up like the poor beasties they serve as “Rain Forest Burgers.”

Velina Brown smoothly directs this rousing satire that exposes the monsters of climate change, homelessness, the drought, and the continued exploitation of workers. With brightly painted sets and a whirlwind of scenes, the future creeps in to destabilize the present.

They play all summer, so you can spread out on the grass at your local park with other fans and eagerly applaud the music, jokes, and politics. The comic songs add life and lyricism to urgent political truths.

“Back to the Way Things Were: A New Musical” by Michael Gene Sullivan with Marie Cartier, music & lyrics by Daniel Savio, directed by Velina Brown, by The San Francisco Mime Troupe, FREE in PARKS around the Bay.  Info: sfmt.org – to Sept. 5, 2022.