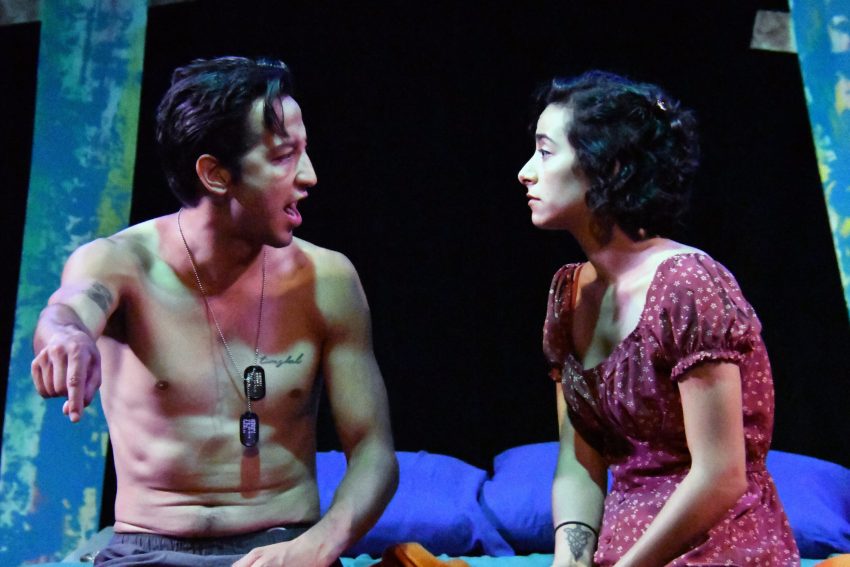 As the moon takes over the surreal California desert, the night sky and thorny cactus glow fluorescent blue. Beside an elongated green statue of a woman, a lustful wild Coyote (Gabriel A. Ross) and a spoiled house Cat (Alexandra Wahl) engage in a passionate debate and sexy love dance. Under scenic designer Sarah Phykitt’s magical spell, Coyote lures us in:

COYOTE:
You think everything they do is good.
Have you seen what they’ve done to my desert?
The way the mountains
are so nicely carved up—
oh, such beautiful scars!—
oh, the pretty bomb craters!—
those sexy switchblade cuts
in the flesh of the land!

Seductive Cat asks her owner Gabriela (Carla Gallardo) what happens if her lover, Coyote, is a ghost. Gabi pauses and says, “Love him anyway.” The convoluted clashes between these insecure lovers in José Rivera’s “Dali” leaves us wondering about the clash between passion and domesticity, and the interaction of love and war. What exactly is the connection between the talking animals and the struggling human lovers?

Walking around the big central bed, Gabriela anxiously waits for her husband, Benito, to return from the Gulf War. Her spiraling thoughts burst like bullets, hitting us:

GABRIELA:
They say vampires are buying
up houses all over Barstow.
They say vampires are well organized.
They’ve filed down their teeth.
They smile without fear of detection.
They gain your trust.
You invite them over for barbecues.
You go to movies together.
You cuddle during the scary bits.

When tall, confident Benito (Caleb Cabrera) finally enters with a soldier’s composure, he is hiding a world of turbulence. The war has scarred him in ways that his mind refuses to process. Guilt and pain cry out in his nightmares. Cabrera helps us empathize with Benito’s secret wounds:

BENITO: Hi honey, I’m home! Back from the field.
From two hundred cancer-making degrees.
From boredom so perfect and rare it lacks a name.
From nothing good to look at but the backsides
of doorknobs with their thumb up their ass.
Farm boys so interbred they can’t tell a M16 from the gun between their legs.

Playwright José Rivera’s poetic dialogue carries us to a cloudy realm between poetry and drama—between the real and surreal. While Cat and Coyote echo Gabi and Benito’s marriage, they fail to connect the dots between nature and humans, between love and war.

Sitting on a tree in an elegant white suit, the Moon (Cabrera) charmingly reflects on the inconstancy of our lives, but even he cannot explain the disconnected streams of consciousness.

Gabi wants a stable and intimate life, but Benito has nine more years to serve in the Army. The Army lifted him out of poverty and despair, but now the war stands between them. They can no longer comprehend each other.

Gabi and Benito’s sudden shifts in power and movement catch me off guard over two hours of emotional dialogue. We sympathize with their frustration, but it’s tiring to go through it with her, over and over.

Martín (Jonny Banuelos), a 14-year-old neighbor boy, spies on Gabi with a telescope. Martín’s open pursuit of Gabi adds a touch of innocence and hope. But even playful Martín fails to lighten the burden of emotions we feel for Gabi throughout her repetitive monologues.

In a lush and lovely show, there are fine moments of feeling, but the insights leave us confused, wanting some connection between the separate parts.

Foreign and domestic conflicts dominate Gabi and Benito’s arguments and impact us. Gunshots of war have come home to our cities—to Buffalo and Chicago on the Fourth of July. Battles over gun control and abortion have brought the war home to each of us. Gabi cannot escape, and neither can we.