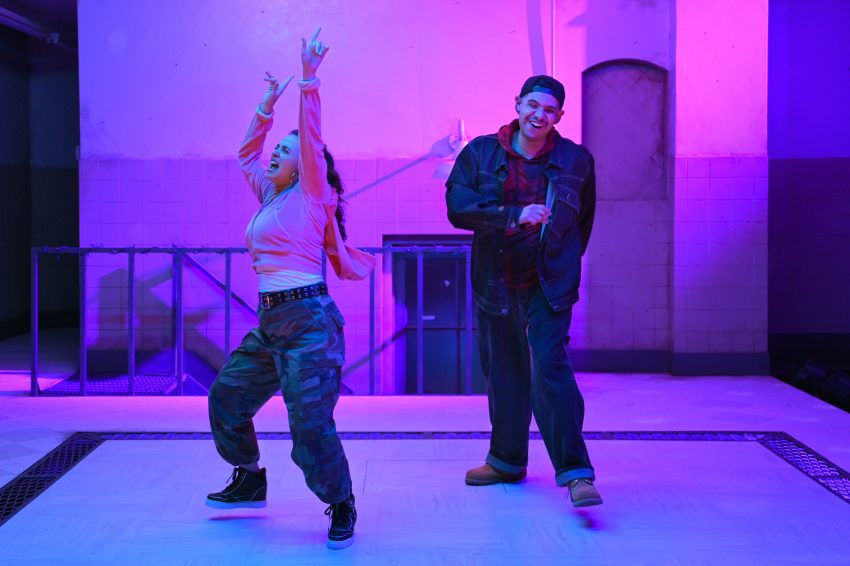 Clear-eyed Pulitzer Prize-winning playwright Martyna Majok pulls back the curtain from the furtive lives of undocumented immigrants. Majok doesn’t indicate any specific country of origin but embraces all U.S. immigrants who are forced to live undercover—like the Dreamers who came here as children.

Her three-person play about immigrants in Newark, New Jersey, brilliantly transforms abstract debates about immigration into a real-life horror story.

“Sanctuary City” is not a love story. It could be, but the looming thought of deportations and missed opportunities make love secondary to survival. Her two charming teens, Boy and Girl, cannot look forward to college, good jobs, or fair pay because they live in constant fear of discovery.

In a series of staccato scenes, B (Hernán Angulo) and G (María Victoria Martinez) reenact what it’s like to be adrift in their young lives. The quick, talented actors move in and out of swiftly changing moods and feelings. Whether she’s climbing an imaginary fire escape to his window, or they are cuddling in bed, they are still isolated.

Sharp, witty, rose-colored lighting emphasizes their isolation on a dark, empty stage, as they escape from over-burdened parents, a dead end job, and a hopeless future. Even though Newark is a Sanctuary City that might protect them, they are leaves fluttering in a cruel wind.

Terrible things happen to people who have no protection under the law. Many disasters befall those in hiding. How can they express themselves, get education, and establish relations if they have no person-hood in this country? B & G need each other for support, for love, for compassion. They are in need, but is it love?

B would rather be in college than working at a fast food joint. Luckily, G unexpectedly gets citizenship, so she can go away to Boston for college—though she’s not very interested in school. The two young actors pull us in with their intensity and passion.

Majok divides the piece into two parts. The first part is a poetic plea for the tortured humanity of two lost young souls—it’s irresistible. We are totally won over by the couple, with a hint of West Side Story—but do we know who they are?

Suddenly, the duet becomes a surprising trio, as they kick off a life and death debate. Our assumptions are overthrown and a new calculus appears—a life-changing turn of the screw! The demanding news puts us on the edge of our seats.

Rushing to a painful conclusion, the trio tests their love and commitment—in a heart-rending climax.

Majok’s poetic language and David Mendizabal’s pinpoint direction makes every moment gripping and thoughtful. “Sanctuary City” stays with us because Majok tells us about hidden lives we pass everyday in the street. She makes us look truth in the eye—don’t miss it!