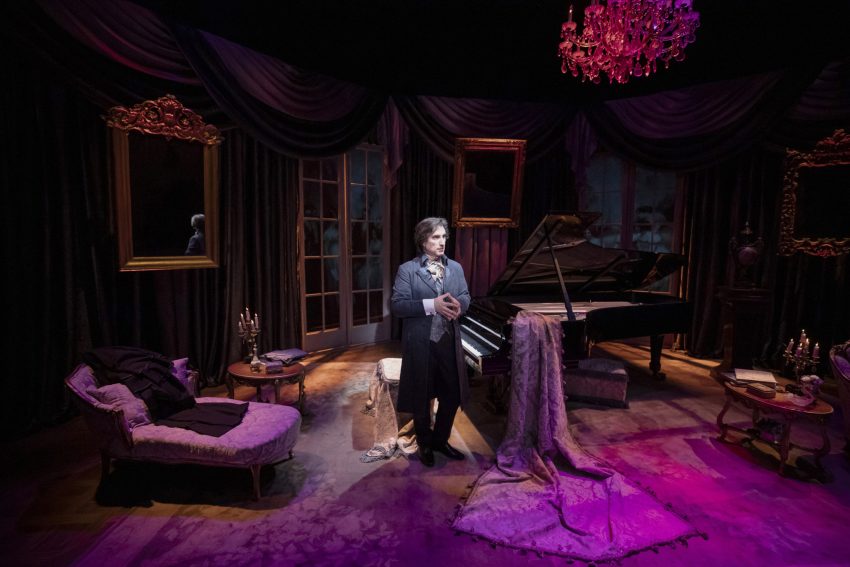 If you want to see a superb, polished performance of Fryderyk Chopin playing his music in his Paris salon, the new Hershey Felder production is the ticket. Felder’s special blend of theatricality, history, and piano work shine in “Hershey Felder: Chopin in Paris.”

I’ve seen him perform as Beethoven, Tchaikovsky, and Debussy—and discovered a lot about the lives and music of each composer.

Watching Felder this time almost makes me feel like a he’s an old chum. He’s relaxed, friendly, and happy to be with those of us who have watched him ‘settle’ into several composer roles. Actor, pianist, and storyteller—Felder does it all.

This time Felder’s Chopin welcomes his “students” (us) to a piano lesson in his private salon in Paris, in 1843.  While sharing his life in his native Poland and later in Paris, he frequently takes questions from audience members.

His handling of questions is awe-inspiring. Whatever question is thrown at him, Felder comes up with a sincere, logical answer—demonstrating his grasp of Chopin’s personality and devotion to his music.

Later, Felder holds the audience captive as he mourns the loss of his little sister in Warsaw, and then describes how he misses his family and friends in Poland. The music simply soars as he plays the great “Funeral March,” which seems to encapsulate his life.

This time around, Felder also smiles and laughs more, even making fun of himself! It’s a rare quality when an actor can pull this off, but Felder’s Chopin makes me feel that he is talking directly to me and a small group of friends.

At one point Chopin admits, “I do not like concerts” with a sly smile. But since we are at his concert, we cannot help laughing at this little conceit.

We follow Chopin’s affair with the famed French woman novelist Aurore Dupin, known as George Sand. She dressed in men’s clothes and lay under his piano to be close to his heart. (Later she cruelly rejects him after a long affair.)

TheatreWorks says Felder has 15 Chopin compositions in his repertoire. He decides each night which piece he’ll play next, based on questions from the audience. It’s amazing to me how he is able to make these decisions on the spur of the moment!

Felder continues his banter directly with the audience, encouraging us to ask questions, saying with a smile: “Whether you ask or don’t ask, you still pay 20 Francs for the lesson.”  Now how do you not react to a line like that?

Chopin suffered from “melancholia”—now called bipolar disorder and died early at age 39.  Yet Felder makes us believe Chopin is with us for a few hours. What touches me the most about Felder’s “Chopin in Paris” is that with age and maturity, his productions seem even more human and accessible.

Felder also includes a political statement when his Chopin says he wants to return to “my beloved Warsaw … Russia thinks we belong to them!  We do not!”

But Chopin, himself, belongs to us all, now. And with Felder as Chopin, we get two masters rolled into one!