Sunlight filters through the redwoods as a gentle breeze mingles with the music of the band before the play begins. Curtain Theatre’s delightful band, under the direction of Don Clark, plays traditional and original music throughout the play. Some Italian tarantellas help to establish the setting.

Set Designer Steve Coleman has painted a forest on the wings of the stage blending into the surrounding redwood glen. And Shakespeare’s exiled outlaws from Milan are lurking in those woods.

It’s refreshing to see Shakespeare done as he wrote it. Curtain Theatre’s version, a balanced mix of poetry and prose, comedy, and drama, is still relevant today. Designer Jody Branham’s Elizabethan costumes enlighten us about the characters and their social standing. We see rich golds and purples on the Duke of Milan and his daughter Sylvia and drab browns and green on the servants and outlaws.

“Two Gentlemen of Verona” could be called a feminist play because only the women are “constant.” Julia (distressed Isabelle Grimm) and Sylvia (steadfast Gillian Eichenberger) know what it means to love; they have the moral character not to be fickle.

These women will be calling the shots before long. Once won, they are fast and true and will express their righteous indignation.

Golden boy Valentine (energetic Vic Moore) is off to Milan to see the wonders of the world and urges close friend Proteus (Nelson Brown) to come with him. Valentine is admired by Proteus’s father for his industriousness. Before he departs, Proteus is beside himself revealing his love for Julia to his friend.

Valentine scoffs, he doesn’t believe in love at first sight. They are the best of friends but parry back and forth playfully on the virtues or vices of Love:

Valentine:
Love is your master, for he masters you;
And he that is so yoked by a fool,
Methinks, should not be chronicled for wise.

Proteus:
Yet writers say, as in the sweetest bud
The eating canker dwells, so eating love
Inhabits in the finest wits of all.

Proteus’ father Antonio (stern Mark Shepard) pushes his son to see the world and make something of himself, commanding: “Off to Milan!” Proteus felt buoyant in loving Julia, but is deflated by his father’s order. We feel sad when Proteus abandons his fiancée Julia and goes off to Milan, following Valentine.

Proteus’ comment, played enthusiastically by Nelson Brown, sums up this story of two friends who soon find themselves in competition for the same woman:

Proteus:
Oh, how this spring of love resembles
The uncertain glory of an April’s day;
Which shows us all the beauty of the sun,
And by and by a cloud takes all away.

Once in Milan, he is reunited with Valentine whom he discovers has succumbed to the charms of Sylvia (Gillian Eichenberger), the daughter of the Duke of Milan (stern Glenn Havlan). Suddenly, Proteus is besotted with Sylvia, too, and schemes to win her.

In classic Shakespeare fashion, Julia, dressed as a boy, goes to Milan and discovers Proteus has told Sylvia that Julia died. A shocking lie! Poor Proteus is in love with the idea of Love:

Julia:
Behold her that gave aim to all thy oaths,
. . . . .
O Proteus, let this habit make thee blush!
Be thou ashamed that I have took upon me
Such an immodest raiment, if shame live
In a disguise of love:
It is the lesser blot, modesty finds,
Women to change their shapes than men their minds.

Proteus:
Than men their minds! ‘tis true.
O heaven! were man
But constant, he were perfect!
. . . . .
Inconstancy falls off ere it begins.
What is in Sylvia’s face, but I may spy
More fresh in Julia’s with a constant eye?

The ensemble cast is terrific, each one adding a bit of joy to the production. Foppish Thurio (Jamin Jollo) who also is after Sylvia’s favor, reminds me of John Ritter. His physical comedy is the best sort of silliness.

Tell your friends, pack a picnic basket, and treat yourself to a charming romantic Shakespeare comedy in Mill Valley. It’s a free performance but when the hat is passed, be generous. 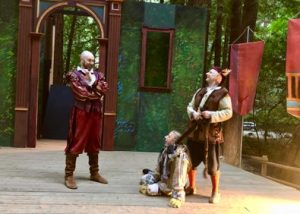