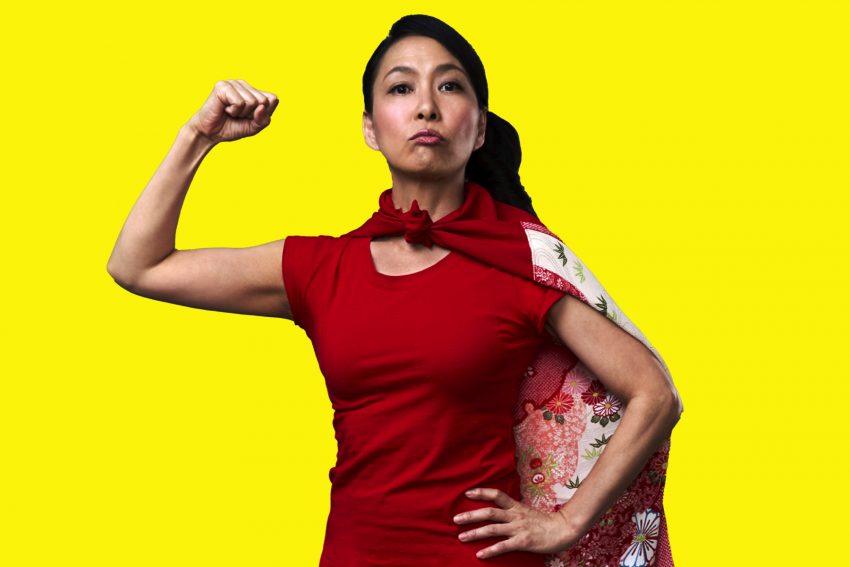 Kazu Kusano: There’s No Stopping Her!

The Fringe Festival is for something different and “Pretty Beast” obliges.  Kazu Kusano’s one woman show tells an immigrant story, but you’ve not heard this one before.

At start we see a black box stage, empty but for a mic. Then from behind a side curtain a hand waves determinedly, urging us to clap. There’s no resisting that imperative hand, so we applaud and Kazu bursts out. She’s all motion and energy, dressed in bright red tee-shirt, culottes, and a skirt that becomes a cape when superpowers are called for. That motion and energy, that passion, continues for an hour.

Kazu starts with a stand-up routine, jokes, mimicking, call outs to the ethnicities of the crowd, all the usual stand-up shtick. Then comes the change-up. The jokes end, the mic is pushed aside and Kazu explains why a 30-year-old woman travels—alone—halfway around the world to a country with a different language to start a career as a comic.

Born in Japan, she was raised by schizophrenic mother and an alcoholic father, with help from a sweetly smiling grandmother about whom I had a brief nightmare later that night. This upbringing spawned her humor and rebellious spirt.  I have no idea what explains her energy.

Kazu grows up and decides to be an actor.  Japanese drama teachers try hard, and futilely, to teach this wild young woman to be helpless so she can get parts.  I’m still laughing at the image of a director trying to show Kazu how to flee in fear.  He demonstrates a cringing creep across stage with a terrified face. When Kazu tries, she stands up and fights back.

Kazu’s having trouble getting parts, income, or respect when suddenly Improv reaches Japan.  Is this a place where she can finally fit in? But women comics are not valued in Japan, and she wants respect, too. Is there any place her work can be appreciated? Her inspiration comes from an American movie, but I’ll let Kazu tell that story. I bet you’ll be rooting for her as hard as I did.

Throughout her tale, Kazu assumes personas from her past, parents, neighbor kids, the Japanese drama teachers, even the embodiment of her inner, doubting voice. And, of course, that grandmother. Kazu’s always on the move—dancing, singing, gesturing, running.

At the end she returns to the stand-up routine. I won’t spoil it, but for the record she tells the best Pearl Harbor joke I ever heard.

Kazu gives us a tale of sexism, schizophrenia, alcoholism, and low self-esteem—but above all, courage.  What’s not to like?

For mature audiences, the show won Pick of Fringe in Vancouver and Best of Fest at Crazy Woke Asians Solo Festival in Los Angeles. Join Kazu before she runs off.