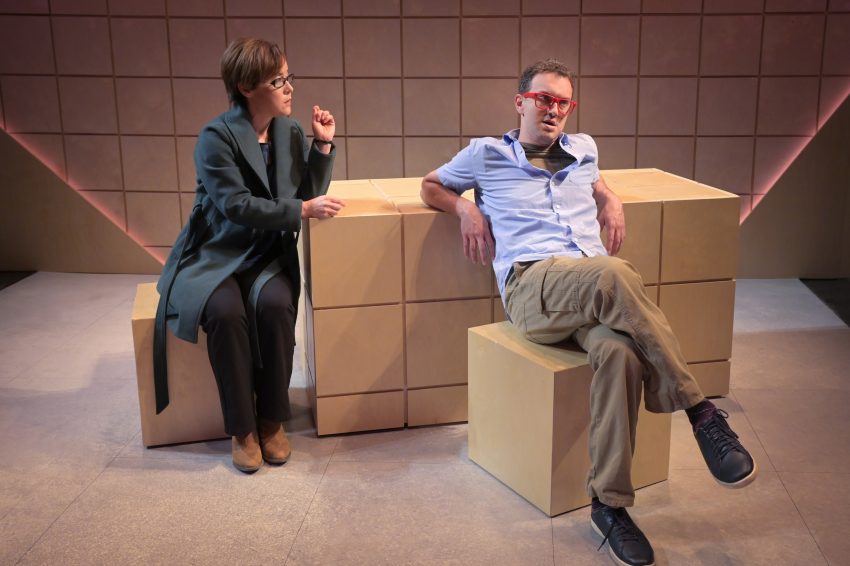 “This Much I Know” by Jonathan Spector is a powerful play that explores the mental processes behind decision making, as well as the ways we defend against change. Spector urges us to think about thinking.

We are first introduced to amusing Indian psychologist Lukesh (dynamic Rejesh Bose) who greets us as his class. As Lukesh, Bose engages us with his precise British accent, his wit, and his elegance. He lectures and shows funny photos on an imposing tiled wall—mingling brainteasers, a cowboy, and tater tots.

The professor educates us about two basic ways of thinking: quick, intuitive, emotional versus slow, deliberate, logical. Based on Daniel Kahneman’s Thinking, Fast and Slow, these ideas form the play’s foundation.

We are then introduced to Lukesh’s wife Natalya (versatile Anna Ishida) who runs away to Russia to do research. Ishida also plays Stalin’s historical daughter, who fled Russia for America after her father’s death. Natalya suffers from the guilt of an accident that shattered her self-worth. By hiding behind her writing, she thwarts any swift change.

The third character, Harold (multi-talented Kenny Toll), a white Nationalist student, holds onto his father’s racism—even while questioning it. Harold, too, is faced with crucial choices, as he struggles to change. Toll also transforms into wonderful Russian characters, with amazing speed—a master of deception.

Lukesh explains that we all have a self-narrative that defines who we are. He demonstrates how our intentions, choices, and self-definition are all wrapped up in learned ideology and cultural development—East or West, capitalist or socialist.  He insists that we often struggle to stay close to that narrative, and avoid change, in fear of “floating out there in the world,” and shattering our sense of self.

Ishida also plays Svetlana Stalin who, as a child, believed she could order Stalin to do anything. He would command her: “What do you want me to do? Order me.” Over many years, she slowly realizes that she was raised under an authoritarian regime, led by her father.

Like Svetlana, we are desperate to have things connect, and will accept any premise that gives order to our lives. Based on their upbringing many people cling to their extreme ideologies.

Bizarre and comic talking portraits represent Stalin, the white supremacist’s father, and other dictators—speaking like robots from their portraits.  The dictators, with moving cartoon mouths, spout diatribes against minorities and common people.

With speedy comedy and serious insights, Spector’s unique play entertains and enlightens. Surprises still pop up—like the Russian officer who saved the world in the 50s, defying his rigid ideology.

Director Josh Costello artfully blends many intricate moving parts into a brilliant syncopated whole, capturing our imagination. “This Much I Know” can motivate us to change our lives and re-evaluate our deepest beliefs. We, too, can even reject parental rules and authority, seeing the world afresh. A must see.

“This Much I Know” by Jonathan Spector, directed by Josh Costello, scenic design by Tanya Orellana, video/projection design by Maxx Kurzunski, by Aurora Theatre Company, Berkeley. Info: AuroraTheatre.org – to October 2, 2022.