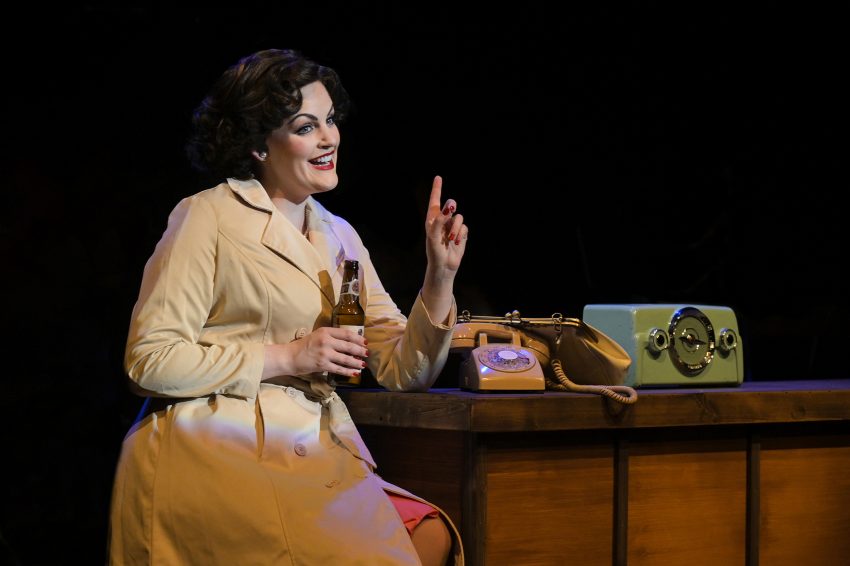 At Lesher Center in Walnut Creek, I enjoyed Center REP’s retrospective of the short but brilliant career of country folk singer Patsy Cline. Cayman Ilika does a superb job of interpreting 27 of Patsy’s iconic songs.

The show follows the unlikely relationship that develops between Cline and a super fan Louise Seger, played by the exuberant and hilarious Kate Jaeger.  Jaeger provides much of the dialogue, which comes from their letters over many years.  These letters reveal that Cline is no diva but a down to earth real person, whose genius makes her songs soar to magical heights.

The die-hard Cline fans were rewarded with their favorites, mine being “Crazy,” written by the legendary Willie Nelson from his early days as a Nashville songwriter.

Director Karen Lund moves the show at a rapid clip, without shorting us on tender classics like “Sweet Dreams.” Costume changes also chronicle Cline’s evolution from the cowboy dresses with boots and fringes to the sleek, sparkly gowns of a night club crooner.

The six-piece band under the direction of Ken Bergman plays beautifully, providing a strong back up to Ilika’s outstanding and memorable vocals. Rather than mimicking Cline, Ilika puts her own interpretation on the classic songs. She pays reverence to Cline without making her performance a parody.

The chemistry between Ilika’s Cline and Jaeger’s devoted fan provides comic relief and reveals much about the true nature of this legendary star.  Because the show is so fast paced, the plot suffers from a lack of dramatic tension. There’s no time to give credit to Cline for the many barriers she faced trying to break into the male-dominated Nashville scene.

We are presented with a satisfying review of her music—without much knowledge about Cline’s strong feminist stances. Cline was one tough lady and there’s more to tell.

Patsy Cline fans are going to be richly rewarded by this production by writer and original director Ted Swindley. During the show’s 30-year existence, it has enjoyed tremendous success around the world, including New York.

The acclaim is well deserved and CenterREP at the beautiful Lesher Center, an elegant venue, makes for an ideal night on the town. “Always…Patsy Cline” is a must see for any true fan of this iconic singer.