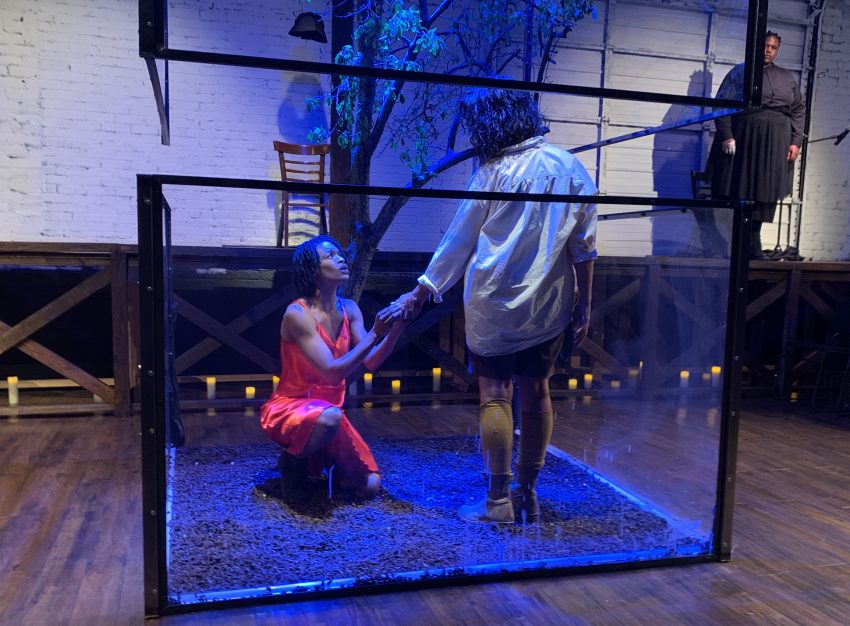 Arthur Miller had the Big Red Scare in mind when he wrote “The Crucible” in 1953. Miller depicts the Salem Witch Trials in Massachusetts, but he was addressing the outrage of MacCarthyism in the 50s. The accusations of witchcraft represent the Big Lie of Miller’s time.

Today we have another Big Lie among other alarming nonsense. Oakland Theater Project’s bold new “Crucible” offers us a blueprint for exposing lies using critical thinking.

Scenic Designer Karla Hargrave’s wild forest consists of a glass box. Inside, there’s one scraggly, tortured tree and red bark on the floor—looking like a specimen container. Anyone who enters the glass cage is scrutinized or on trial.

The judges sit on a raised platform on three sides of theater, contributing to the sense of intimidation. We must peel back several layers to get to the truth—or, until the self-righteous Puritan judges are satisfied.

Some of the young accusers try to blame Tituba (lithe Paige Mayes), a slave from Barbados, who sings and dances hypnotically in a silky red slip, inciting charges of witchcraft. Red is for danger!

As in Footloose, heaven forbid there should be dancing! Must be the work of the devil. Mayes brings Tituba alive as an exotic foreigner compared to the citizens of Salem, who wear stark black and white. Kudos to Costume Designer Martha Powell.

Puritan society in Massachusetts was controlled by men who attempted to regulate citizens’ morality using surveillance. To stay in good standing with the church, neighbors were compelled to spy on each other. Ironically, the Puritans who left Britain for religious freedom became rigid and oppressive in the U.S.

Allegations of witchcraft are damaging to Reverend Parris (forceful Becca Fink), so he engages Reverend John Hale (impressive Jessa Brie Morena) to delve into these “supernatural” events.  Morena takes us on the revealing journey of one minister who finally uncovers the truth.

As Music Director, Fink plays Philip Glass inspired, repetitive music which cues our emotions as tension mounts. We are also bombarded by foot stomping and angry screaming from the reverends and judges, prompted by hysteria and fear. But the ritual stomping and loud shouting make their words hard to understand.

When John Proctor (swaggering Lisa Ramirez) and his “good wife” Elizabeth Proctor (dignified Halili Knox) are accused of witchcraft, they are shocked and dismayed. They never saw those sorcery or political accusations coming. Their accusers—wonderfully played by Kamaile Ainas-Benson, Ije Success, and Romeo Channer—strike terror and compassion in our hearts.

Lighting Designer Stephanie Anne Johnson projects lines from the play on the white brick walls for emphasis. The writing is on the wall. And at a climactic moment, ominous silhouettes of birds emerge.

See this bold “Crucible.” The setting, the anger, and the familiar accusations make this production relevant to confronting today’s “Big Lies.”